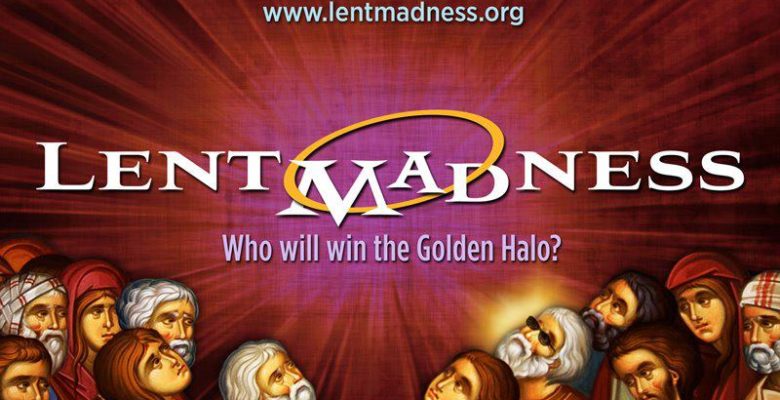 “First of all, it’s lighthearted and fun! But more importantly, Lent Madness is a vehicle for learning about the women and men of faith who have gone before us in Christ.”

What is Lent Madness?
Loosely based on the wildly popular NCAA basketball tournament, Lent Madness pits 32 saints against one another in a single-elimination bracket as they compete for the coveted Golden Halo.

Here’s how it works: on the weekdays of Lent information is posted at www.lentmadness.org about two different saints, and then participants vote to determine who goes on to the next round.  Each pairing remains open for 24 hours as people read about and then vote for their favorite saint.  Sixteen saints make it to the Round of the Saintly Sixteen; eight advance to the Round of the Elate Eight; four make it to the Faithful Four; two to the Championship; and then winner is awarded the Golden Halo.

The first round consists of basic biographical information about each of the 32 saints.  Things get a bit more interesting in the subsequent rounds as we offer quotes and quirks, explore legends, and even move into the area of saintly kitsch.  It’s fun, it’s informative, it’s the Saintly Smackdown!

Why you need it
First of all, it’s lighthearted and fun! But more importantly, Lent Madness is a vehicle for learning about the women and men of faith who have gone before us in Christ.  They offer us a way to view the world, and to template for living as Christians in the world, whether 2nd century Rome or 20th century Uganda.

As you read about each saint, you can reflect upon their life quietly to yourself; you can engage in Facebook feedback; you can share saintly information with your family or your friends and challenge one another to fill in the Saintly Bracket.  The program can also be used in small group study or as a conversation starter during coffee hour.

Forward Movement is a partner organization of the Center for the Ministry of Teaching, at Virginia Theological Seminary. Scott and Tim are even allowed to visit campus, for now.