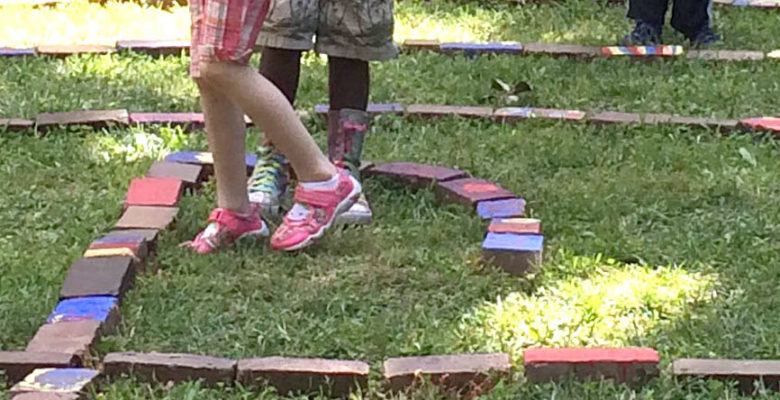 “Whenever I walk the labyrinth, I will remember children making this beautiful sacred space – with hearts, question marks, joy, and a baseball field – and see the passion behind their creativity. Their bricks represent the fulfillment of God’s promises.”

Walter Brueggemann’s Narrative of “Making Bricks”
The Vacation Bible School (VBS) program at three Episcopal churches in Louisville, Kentucky, began with a seed planted by the keynote speaker at the Christian Formation Conference at the Kanuga Episcopal Camp and Conference Center in the foothills of the North Carolina mountains. Walter Brueggemann, a pre-eminent Old Testament scholar, gave us a prophetic vision to pass on to our children.

For five days Brueggemann spoke about the “totalizing narrative” that began with the story of the Hebrew people enslaved by the Egyptian pharaoh. He asked, “Are you working, living in ways that fill you with passion or are you working in unfulfilling ways to simply survive or to make more money so that you can have more things which are supposed to make you happier?” Just as the Hebrew slaves became more reliant on the pharaoh as they made more bricks, he said, we have become slaves to our possessions. Brueggemann asked the group several times during the week, “Are you making more bricks today?”

Continuing the Conversation
After the conference, conversation about this question continued on Facebook. People who did not attend the conference were drawn in. There were positive connections to bricks made carefully by hands that know the importance of building strong foundations. Brick-making also was associated with unfulfilling work that stems from making bricks without adequate straw or water. For some of us, “Are you making bricks today?” became a way of checking-in and thinking about our lives.

Bricks Become a Real Symbol of Building a Faithful Community
When a parishioner from my parish approached me with an idea to use bricks to make an outdoor labyrinth during VBS, I laughed and told her about the recent conversations around the story of “Make More Bricks.” Our planning team for a joint VBS with St. Andrew’s, St. Mark’s and Calvary Episcopal Churches, embraced her idea. Bricks, their positive contributions and sometimes negative associations, were a symbol for many of us.

Preparation
Bricks were gathered by the community for weeks before the start of VBS. Parents, grandparents, older siblings, and others moved, cleaned, and prepared them with clear sealer. Already, bricks were building community, as the preparation was filled with laughter and cooperation.

Thinking, Painting, Placing
On the first day of VBS, group leaders asked the children to paint a symbol or words on the bricks that expressed their view of God. The actual painting took place in the church lobby, as it poured down rain! Thankfully, the bricks were moved inside onto tarps before the rain started!

Caroline Deutsch, the labyrinth project leader, told me that the children took this project seriously. They studied their bricks and thought about what they would paint before applying their brushes. One child sat in quiet contemplation for most of the 25-minute session before selecting a paintbrush and the color yellow to paint some lines, circles and squares on his brick. “It’s a baseball field, he said. “That is where I see God.” 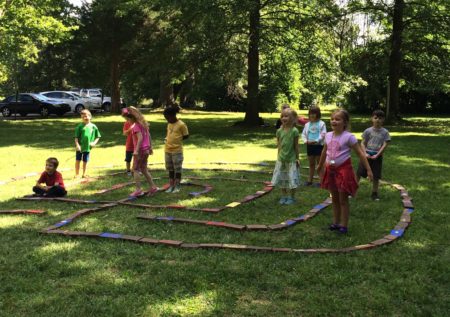 On the second day the sun was shining. Our labyrinth design had been mapped-out two days earlier on the grass with spray paint. The VBS “tribes” carefully carried their bricks outside and placed them on the grass. Over 360 bricks were used; painted bricks interspersed among bricks that had not been painted.

The third day of VBS the children walked, ran, and danced through the labyrinth they had created. Through their creativity, the children had shared their thoughts and love for God. Their bricks made a prayer space full of hope – a firm foundation indeed.

Prayer Space Built with Bricks of God’s Promises
The afternoon VBS closed, I walked to our labyrinth created with love and intentionality. Before stepping into the labyrinth, I gazed at the bricks painted children ages 3 to 11. I saw passion in those bricks. Children had drawn rainbows and hearts and words of love for God. I thought of our church school teachers when I spotted a brick painted blue with a big red question mark. To me that said the church is open to questioning, wonder, and doubt.

Whenever I walk the labyrinth, I remember children making this beautiful sacred space – with hearts, question marks, joy, and a baseball field – and see the passion behind their creativity. Their bricks represent the fulfillment of God’s promises.

This article was originally published in the Spring 2015 issue of Episcopal Teacher. Subscribe for free here.

Debbi Rodahaffer retired after 18 years as the Christian Education Director for Children, Youth, and adults at St. Matthew’s Episcopal Church in Louisville, Kentucky. She is a past president of Forma, the network of Episcopal educators, and currently serves on the planning team for Kanuga’s Christian Formation Conferences. Debbi discovered what she really needed was a year long sabbatical rather than retirement and now serves as the Minister for Parish Life at The Episcopal Church of the Advent, Louisville, KY.