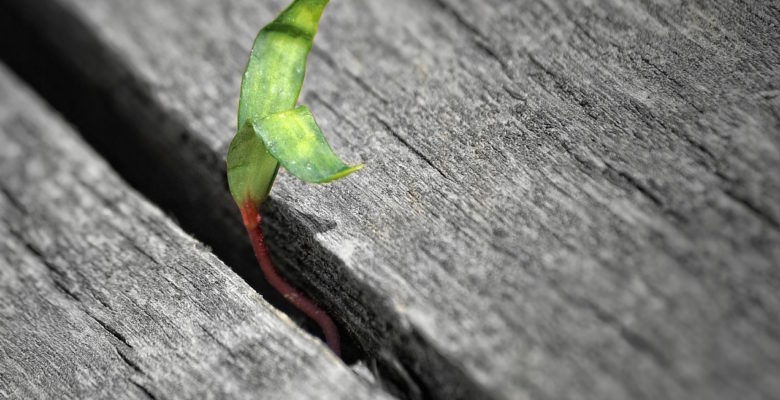 “Thanks to platforms such as IOBY, there are more ways to invite people to become part of the fabric of the faith community; to create a new door to the church, and to work to strive for justice of peace.”

In 1997, the British rock band, Marillion, used the Internet to raise $60,000 to finance their US reunion tour. This radical concept is considered by many to be the birth of modern day crowdfunding. In the late 2000s as social media platforms developed, and our interaction with technology changed, new platforms emerged to make crowdfunding possible. IndyGoGo was created in 2008, Kickstarter in 2009, and by 2011, entrepreneurs had raised $1.5 billion dollars for innovation.

The idea is simple: create a way for the average person to invest anything from a few dollars to thousands to support an idea or innovation. Social media allows for people to gather around ideas and projects. If you find a project on a friend’s Facebook page or Twitter feed, you can invest in that idea through a small gift or grant, helping come to life. However, something else happens when people make donations towards a cause: they invest social capital. A relationship is born.

Historically, faith communities have been most skilled at using the resources of members to benefit the outside community. But with the emerging uses of crowdfunding, there exists a new platform to form relationships and invite faith communities to partner with their neighbors. Together, they invest in the work of transforming communities, all while generating social capital, which is arguably much more valuable in terms of the sustainability of congregations.

In the spring of 2015, three churches in the greater Memphis area began playing with IOBY (In our Back Yards), a crowdfunding platform for projects in neighborhoods. St. Mary’s Cathedral wanted to beautify a portion of Alabama Street and raised money for the Alabama Street Tapestry Project. They raised over $2000 for fabric which would be woven in the iron fence. When asked why they were doing this project, St. Mary’s responded:

“This tired, forgotten, stretch of road does little to uplift the individuals that pass by it regularly. St. Mary’s would like to help create a mini oasis to convey to all the individuals that live and work in proximity the important role each one plays in the tapestry of the neighborhood. Our self worth is closely paralleled to the environment we inhabit. When the world around us feels discarded, so to do we. This project endeavors to convey the importance we believe each person brings to the world.” 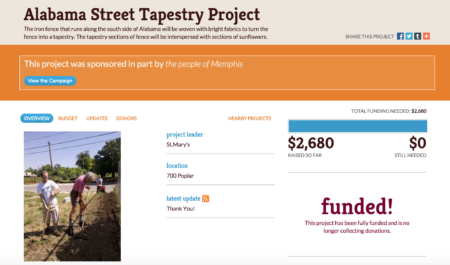 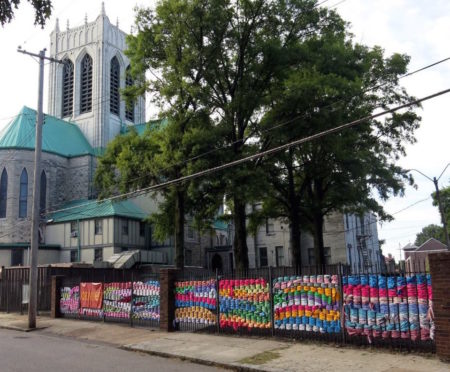 On the other side of town, two Episcopal Churches, Church of the Annunciation in Cordova and Calvary Episcopal Church downtown partnered to raise money for honey harvesting equipment that would be used as part of an apiary located in Cordova. The group is creating a business that aims to employ survivors of sex-trafficking and prostitution modeled after Thistle Farms in Nashville. The group’s IOBY platform raised over $3500 from investors far beyond the Episcopal Church and each congregation’s faith community. The proceeds from the honey sales this fall will support hospitality at Lives Worth Saving, a prostitution intervention program in Memphis. 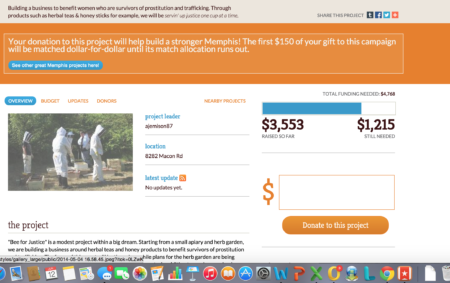 In a climate where many churches are wondering how to build relationships with people who are not connected to faith communities, one strategy is to turn more missional, to find ways of becoming a part of the fabric of the community. Beginning a relationship can be as simple as inviting someone to invest in a transformational project.

Thanks to platforms such as IOBY, there are more ways to invite people to become part of the fabric of the faith community; to create a new door to the church, and to work to strive for justice of peace. This is far broader than church membership – it is partnering in transformation. This kind of work will not be measured by average Sunday attendance or the number of pledging units, and I find that incredibly hopeful.