Home/Featured/Diving for the Cross: An Epiphany Tradition in Tarpon Springs 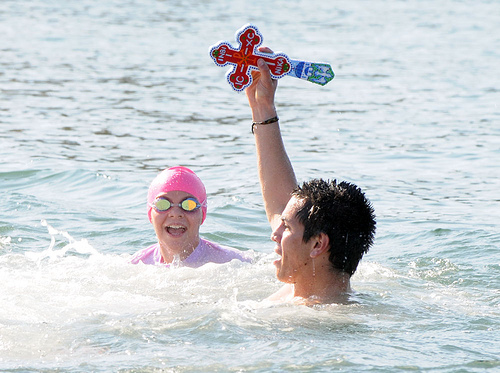 From an article by Demorris A. Lee. Read more, as well as some reflection questions in the entire article, from Faith & Leadership.

Diving For The Cross

That coveted cross has always been part of Dominic Stavrakis’ life.

The 17-year-old has listened to his father describe his own experience grasping for the cross in the murky waters of Spring Bayou in Tarpon Springs, Fla. The white wooden cross, which Steve Stavrakis retrieved during the annual Epiphany celebration in 1980, is now framed and sits on his father’s home office desk.

“The cross has been a huge aspect of my father’s faith, and it’s a blessing of God,” the younger Stavrakis said — “how the cross just landed in his hand, and he feels like he was chosen to get it. Every night he sits in front of it and prays.”

Stavrakis will be one of some 60 Greek Orthodox boys, ages 16 to 18, to participate in the 106th annual Epiphany celebration on Jan. 6, 2012, in this 26,000-person town known for its Greek heritage. Of all the Epiphany celebrations in the world on this day, the one in Tarpon Springs is said to be the largest, earning it the distinction in 1975 as “Epiphany City.”

The day will begin with an 8 a.m. service at St. Nicholas Greek Orthodox Cathedral. Barefooted, the divers then will march through the streets to Spring Bayou.

Following the release of a dove and a special blessing from Archbishop Demetrios of the Greek Orthodox Archdiocese of America, the boys will dive into the chilly waters of the bayou, each frantically working to be the one to retrieve the handmade white cross the archbishop has tossed in, as thousands of spectators watch their every move.

The dive is a ritual that recalls Jesus’ baptism by John the Baptist in the River Jordan. It is also the culmination of an intentional and prayerful effort on the part of the Greek Orthodox Church to steep the young men in the tradition of the church and form them as faithful Christians.