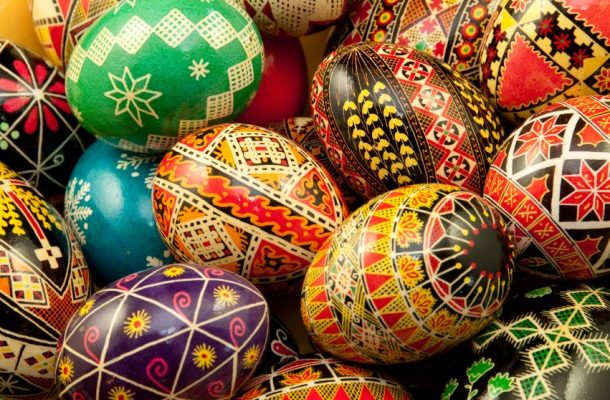 “The eggs were called pace eggs, the word coming from the French Pasque, which means Easter. Eggs became a symbol of the rock tomb out of which Jesus emerged to new life.”

Easter Eggs through the Centuries
The custom of giving eggs at Easter is very old. The first Easter eggs were just ordinary hard-boiled egg, painted or dyed. In some places in the north of England this is still done. In Germany, there is a tradition that green eggs are eaten on the Thursday before Easter. They are died by boiling them in spinach. In Greece, people used to dye eggs red for Easter, using the eggs as a special greeting. Each person carries an egg, and when two people meet they knock the eggs together, saying “Christ is risen!”

During the Middle Ages eggs were not allowed to be eaten as part of the Lenten fast. So Easter Sunday became a day to celebrate with the eating of eggs. Children used to go house to house, singing and begging for eggs. They were paid in hard-boiled eggs, dyed with vegetables such as beetroot (red), spinach (green), onions (yellow)and tea (brown). The eggs were called pace eggs, the word coming from the French Pasque, which means Easter. Eggs became a symbol of the rock tomb out of which Jesus emerged to new life. It is appropriate, therefore, that in Christian homes, eggs be decorated with religious and liturgical designs, such as the cross, the rising sun (Son!), water, candle, etc.

Decorating Eggs
Pysanky is the ancient Eastern European art of egg decorating, of which the Ukrainian version is arguably most famous. The name comes from the verb to write, as you use a stylus (called a kistka) to write with wax on the egg shell. The process is similar to batik.  You start with the lightest color, usually white. Everything that you want to remain white, you cover with wax, using the kistka. Then, you dye the egg, usually yellow. Wherever there is wax, the yellow dye will not be able to penetrate. This preserves the white part of the design under the wax. On your yellow egg, you mark with wax all the parts of the design that you want to remain yellow. Then dye it in the next dye bath, going in progressively darker colors, and add more wax.

In the end, you will have an egg with a great deal of wax on it – if black is your finishing color, you will end up with a virtually black egg. Then, using the side of a candle flame, you melt away the wax, revealing the colors that were protected underneath. This results in a brilliantly colored and often very intricately designed egg, sure to bring much joy to both the artist/creator and the recipient!

Easter Egg Games
In some countries, children play a game, a bit like the British game of conkers, using hard-boiled eggs. Using painted eggs, each of two players holds an egg in his right hand, and knocks the pointed ends together. The idea of the game is to crack the other person’s egg first. The winner is the person who has cracked the most others, but has not cracked itself.

Egg rolling is another old Easter tradition. Children roll eggs down a grassy slope, to see who gets to the bottom first, or to try to hit other eggs. In Britain, the most famous egg rolling is in Preston in Lancashire. Since the presidency of Rutherford B. Hayes in 1878, every year (except between 1942-1953) there has been an Easter Egg Roll at the While House in Washington, D.C. On the Monday after Easter Sunday, all children who want to, may join the famous egg-rolling race – no special invitation is needed. Adults are only permitted to attend if they’re accompanied by a child.