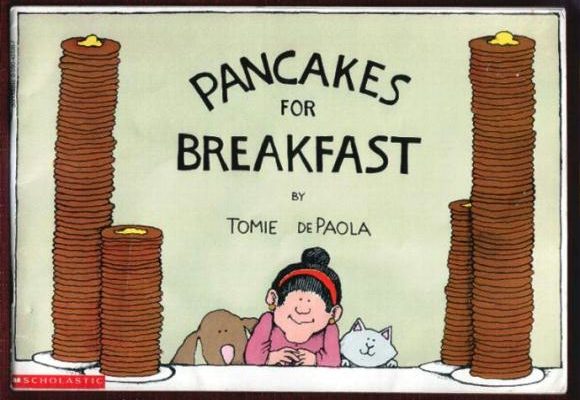 Shrove Tuesday and Pancakes
Shrove Tuesday will be here soon, and with it comes pancakes. Of course, the day is about preparation, community, and drawing closer to Jesus as we prepare for the journey of Lent. Children need to hear all of that, but that doesn’t mean we can’t have a little fun with pancakes along the way.

The following children’s picture books all have pancake themes. While they are not exactly theological or liturgical, these books are a whole lot of fun! You may wish to read one or more on Pancake Day or on the days leading up to it.

Pancakes, Pancakes! by Eric Carle
Knopf (New York, 1970)
By cutting and grinding the wheat for flour, Jack starts from scratch to help make his breakfast pancake.

Mr. Wolf’s Pancakes by Jan Fearnley
M E Media LLC (2001)
Mr. Wolf asks some of his neighbors to help him make pancakes, and even though they all rudely refuse, when the pancakes are done they expect to share the feast.

The Runaway Tortilla by Eric A. Kimmel, illustrated by Randy Cecil
Winslow (2000)
In Texas, Tia Lupe and Tio Jose make the best tortillas – so light that the cowboys say they just might jump right out of the griddle. One day, a tortilla does exactly that.

The Runaway Latkes by Leslie Kimmelman, illustrated by Paul Yalowitz
Whitman & Co. (Morton Grove, IL, 2000)
When three potato latkes (pancakes) escape Rachel Bloom’s frying pan on the first night of Hanukkah, everyone including the cantor, the rabbi, and the mayor joins in the chase.

The Great Pancake Escape by Paul Many, illustrated by Scott Goto
Walker & Co.. (NY, 2002)
When their bumbling magician father accidentally uses the wrong book to make pancakes, his children are led on a merry chase through town trying to catch their wiggly, sneaky breakfast.

Pancakes for Breakfast by Tomie de Paola.
Scholastic (1978)
A little old lady’s attempts to have pancakes for breakfast are hindered by a scarcity of supplies and the participation of her pets.

Curious George Makes Pancakes by Margret Rey, illustrated by H. A. Rey
Houghton Mifflin (Boston, 1998)
Curious George, an inquisitive monkey, causes quite a stir when he tries his hand at making pancakes at a fundraiser for the children’s hospital.

Perfect Pancakes, If You Please by William Wise, illustrated Richard Egielski
Dial Books for Young Readers, (NY, 1997)
King Felix loves pancakes so much that he offers to marry his daughter to the man who can make the perfect pancake.

Pancakes-Paris by Claire Huchet Bishop, illustrated by Georges Schreiber
Viking Press (1947)
Charles could make French crepes for Mardi Gras, the crepes they always had to celebrate the day before Lent in Paris. But how to make French crepes from a package of ordinary American pancake flour – that was the puzzle.