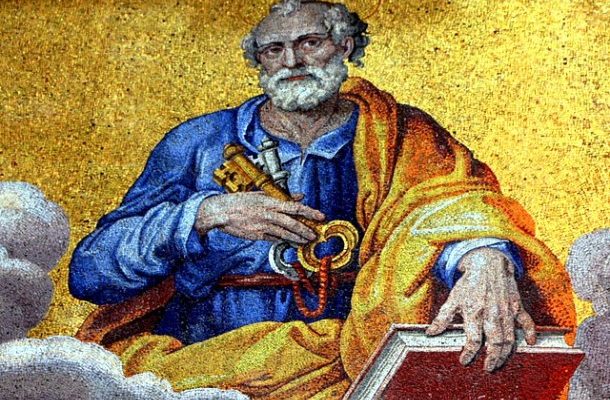 from Living the Good News

Matthew 16:17-19 has been one of the most vigorously discussed passages of the New Testament, especially during the last few centuries as it became the central text for the claim of the papacy to primacy over the Church. At issue is its relationship to the overall New Testament witness of Peter’s actual historical ministry and to the figure of Peter as a focus for Christian understanding.

In reference to the historical role of Simon Peter, scholars are in general agreement on several points. (A) During Jesus’ ministry, Simon was among the first disciples called (Mt. 4:18f; Mk. 1:16f; Lk. 5:1-11; Jn. 1:40-42). (B) Simon was prominent among the disciples as spokesman (Mt. 15:15, 16:15f, 18:21) and as representative (17:24f). He is by far the most often mentioned of the disciples in the New Testament. (C) Simon made a confession of Jesus, and was pronounced “blessed” for it. He was possibly again acting as a spokesman for the others and thus represented their beliefs also.

Many also consider Peter to be the most important of the Twelve. This leaves open the question of his importance in relation to James, the brother of the Lord, and Paul. Peter is pictured as accountable to others (Acts 11:2f), and at the council of Jerusalem (Acts 15:6-21) Peter speaks, but it is James who gives judgment. Paul even feels free to rebuke Peter in public (Gal. 2:11-14).

Peter had a missionary career (perhaps alone among the Twelve, according to the New Testament), especially to the circumcised (Gal. 2:7) but also in largely Gentile areas (1 Cor. 1:12; 1 Pet. 1:1) as signaled by Acts 10.

But Peter stands out in the New Testament writings not only as a historical figure but also as a catalyst or coalescing point for many images of Christian discipleship and apostleship. He is the great Christian fisherman/missionary (Lk. 5:10b; Jn. 21:11) and the chief shepherd/pastor of the sheep (Jn. 21:15-17).

There are likewise a variety of interpretations of just what is meant by various phrases in this passage. To what specifically does “rock” refer? Possible answers include the person of Peter (Eph. 2:20), his faith (Mt. 7:24), or his confession. Another question is, what does “I will give you the keys to the kingdom” imply? What does it mean, for example, in regard to the rest of the disciples? There are a number of texts that present the disciples/apostles as of equal importance (Mt. 19:28; Eph. 2:20; Rev. 21:14); in response to the presentation of James and John for precedence, Jesus answers that this is not his to grant (Mt. 20:23). On the other hand, in addition to the many texts already cited that point to Peter’s preeminence, there are three that assign him to a unique position in relation to the disciples as a group and to the Church as a whole: Matthew 16:17-19, Luke 22:31f, and John 21:15-17.

A further question concerns the authority or power that is carried in that position. Some see the power of the “keys of the kingdom” as equivalent to and summed up in the authority to bind and loose (whatever that authority means, in doctrinal and/or disciplinary terms). It is noted that the function of the keys is later given to all the disciples (Mt. 18:18; Jn. 20:23).

Beyond all this is the question of whether Peter’s position and authority was to be continued after his death, and if so, how? To this, historically speaking, different churches have given different answers. In general, Protestants have declared that Peter’s authority is continued in the Church as a whole, which may delegate it to chosen representatives. The Orthodox and Anglican churches see that authority as especially entrusted to the bishops of the Church, hence the importance of the episcopate. For the Roman Catholic Church, that authority is uniquely continued in the papacy.

The gospel reading for August 21, 2011 (Proper 16) explores the role of Peter as a symbol of leadership for the Church. We are called to build our faith on a solid foundation so we can follow Christ’s footsteps, as well as all those who have come before us in recognizing the true nature of Jesus.

Living the Good News is a lectionary-based curriculum published by Morehouse Education Resources, a division of Church Publishing Incorporated.