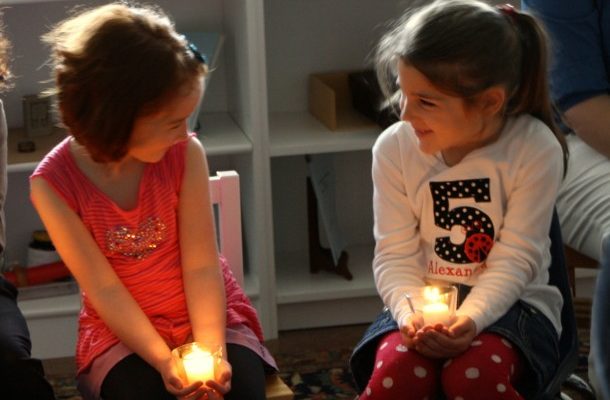 “Finding a way to share Ash Wednesday with children may be difficult, but it is not impossible.  In my own parish, we do it through song.”

Darkness and Song
As a little boy I often used the power of song to ward off the monsters lingering in the dark corners of the basement and in the fringes of my imagination.  Singing in the dark, I immediately felt better. I knew that if my song were suddenly truncated by some sinister force, my parents would hear and come save me.  But what children don’t know is that singing actually has the physical ability to calm our worries and anxieties.  Music can help us sing the blues away; dispel our fears; and as the old Shaker hymn tells us, “come down where we ought to be.”  Which brings me to Ash Wednesday…

On Ash Wednesday we are called to reflect on death and our own mortality. Because we are unaccustomed to doing that regularly, the day often feels a bit like that dark basement. While we know that we will all eventually face death, most parents can’t even begin to contemplate the mortality of their own children. I can still feel the terror from when I took my own eight-month-old son forward to receive ashes on his forehead. Seeing the ash on his head brought me out of any individual or maudlin thoughts about my own mortality or my own sin. Seeing the ash on his soft skin caused something to crumble inside of me.  Even the newly born – so pure and so innocent – are marked for death.

It is no wonder then, that we seek to isolate our children (and ourselves) from such thoughts. And yet, might we not be better served by acknowledging that all things end; that death is also part of life? We’re not hiding this from our children. They already know that all things end.  Why else would they be afraid of the dark?

Ash Wednesday with Children
Finding a way to share Ash Wednesday with children may be difficult, but it is not impossible.  In my own parish, we do it through song.  For several years we have leveraged the weekly Wednesday children’s choir practices to share the experience of Ash Wednesday and Lent. By inviting the children to sing in the midst of this service, we allow the power of song to be their consolation even in the dark moments of life.  We equip them to deal with death and mortality head on.

Finding suitable children’s song for Ash Wednesday can be a challenge, but there are some especially designed for this purpose and others that can be appropriated.  The former are mostly Roman Catholic songs and they include:

The latter are mostly Taize and other simple chants/hymns that can be repurposed:

This list is by no means comprehensive. There are any number of suitable pieces that one could chose.  The point is that choral music literally lets us sing away the darkness and fear of death.  Song  transforms these potentially depressing and dark ideas into our friends, allowing us to better appreciate the richness of life.

Held in Love
In Let Your Life Speak, Parker Palmer shares the story of his struggle with depression and how the words of his therapist helped him find life in the midst of death:

“You seem to look upon depression as the hand of an enemy trying to crush you,” he said.  “Do you think you could see it instead as the hand of a friend, pressing you down to ground on which it is safe to stand?”

That is what Ash Wednesday does for all of us – young and old. It gives us a place to stand grounded and rooted.  And a little bit of song might just help us take down our medicine more easily. You may be an adult singing in a formal service, or a child humming in a playroom – the truth is, “ashes, ashes, we all fall down.”  And the same loving Creator who formed us from the dust continues to hold us up in eternal love.

The Rev. Luke Fodor is the Rector of St. Luke’s Episcopal Church in Jamestown, New York. The article above was written while he served at St. John’s Episcopal Church, Cold Spring Harbor. Having spent nearly 5 years working at Episcopal Relief & Development, Luke believes in empowering children and youth for God’s mission in this hurting world.