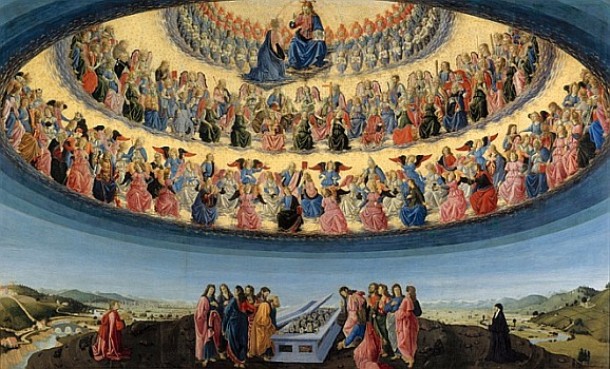 August 15th is the Feast of the Assumption. Around this feast cluster so many associations that a wide variety of images can prompt meditation. From the Orthodox Church comes another name for the Assumption: the Dormition of Mary.

The word dormition means sleep; icons portray Mary as falling asleep in the Lord. With roles reversed, Christ holds her wrapped in a burial sheet as if she were a newborn child. Christians remember how she held him, wrapped in swaddling clothes, newly born into this life. “Your grave and death,” they sing on August 15, “could not keep the Mother of Life.”

From the Old Testament come the echoes of Hannah’s song in Mary’s Magnificat. Hannah knew first-hand what it meant for the needy to be raised up. Her barrenness was not only the source of private grief, but also brought public taunting from her husband’s other wife, who was fertile. She knew too the joy of conceiving a child, as Mary has just done, and the subsequent praise that wells up to God. Because of her personal experience, she understood God’s faithfulness to all humanity.

The bond between Mary and Elizabeth touches a chord in contemporary women’s spirituality. Mary turns to Elizabeth because she knows the older woman will understand. As she walked the many arduous miles to Judah, she must have wondered about Gabriel’s words ringing in her ears. She is barely across the threshold when Elizabeth explains: her salutation to the “mother of my Lord” before Jesus’ birth carries a clarity about his identity that many of the disciples who lived with the grown man missed completely.

Elizabeth’s response proves that Mary’s instincts were right. In her confusion, she goes to a sympathetic woman who will nurture and affirm, not to an authority figure who might well scoff or question. Anyone who has found the warm empathy or large embrace of an older woman will nod in recognition at the familiarity of today’s gospel scene.

In his book Radical Grace Richard Rohr adds a further commentary. He points to the way Mary spends little time “in her head;” instead she takes decisive action beyond her fears. She is comfortable with her own power because she knows it comes from God. She does not offer any phony denials or false humility to Elizabeth’s acclaim. What we celebrate today is that her powers is ours; she represents what we shall be. We too share in the redemption and resurrection of Jesus.

Living the Good News is a lectionary-based curriculum from Morehouse Education Resources, a division of Church Publishing Incorporated.