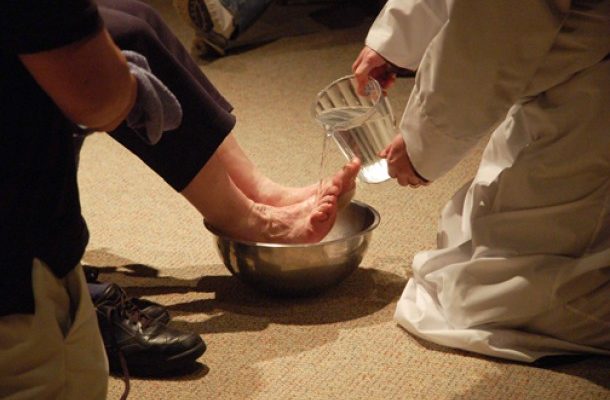 “There is really no excuse for not incorporating the foot-washing into the liturgy of Maundy Thursday night, no matter what the church may or may not have experienced in previous years.”

The Power of the Symbol
Although some dismiss this ritual as an empty gesture, given that it has no relation to our cultural context, the foot-washing nevertheless continues to be for most people a moving a powerful symbol at Maundy Thursday services. Its potential for spillage or embarrassment is perhaps the very thing that gives the foot-washing its power, for those who perform it in some sense lay themselves bare.

The narrative in John 13 describes how Jesus interrupted the meal in order to model for his followers the way of costly leadership he wants them to imitate in their dealings with others. At the words relating how Jesus ‘got up from table, took off his outer robe, and tied a towel around himself’, the presider does likewise, and those assisting come forward in readiness with the bowl and ewer of (warmed) water.

Methods
The precise method of foot-washing will vary, and there are several practical considerations to bear in mind. First, who is involved: the whole assembly, or a token proportion, for example a group of twelve? Second, who ministers this ‘sacrament’ of Christ’s servanthood: the presider, or all of the clergy, or do the members of the assembly minister to one another?

Theological considerations suggest that it is most fitting (because after all this liturgical gesture is concerned primarily with transforming our understanding of leadership) for the foot-washing to be undertaken by the presider, assisted by other clergy as and when necessary, for example if numbers are large of if the presider’s joints have grown creaky (constantly getting up and down and carrying a bowl of ever-increasing weight can become something of an endurance test as the years take their toll). As a general guide, a liturgical minister can minister the rite to around 25 people, efficiently but unhurriedly, without undue delay to the whole liturgy (as The Eucharist should follow).

It also seems desirable that the whole assembly, not just a token few, is invited to participate. All are called to discipleship, and as Peter discovered (John 13:8-10), the foot-washing is as much about receiving as giving. Furthermore, the choice of a token few is both potentially contentious in pastoral terms, and because ever since that first night, making distinctions within the group carries with it connotations of treachery and betrayal: ‘”And you are all clean, though not all of you.” For he knew who was to betray him; for this reason he said, “not all of you are clean”‘ (John 13:10-11).

Such details apart, it remains absolutely essential that, whatever difficulties or initial reluctance, the foot-washing takes place on this night in any assembly attempting to enter fully and deeply in Holy Week. There is really no excuse for not incorporating the foot-washing into the liturgy of Maundy Thursday night, no matter what the church may or may not have experienced in previous years.

“Plow Ahead”
The biggest obstacle is more often than not uncertainty or embarrassment on the part of the presider, especially in circumstances where this ritual is to be introduced for the first time. There is, however, no alternative but to plow ahead undaunted, like John Bunyan’s pilgrim. In pioneering the rite where it is not yet known, the trick is to avoid discussing it beforehand as an idea (fatal!) but simply to let it be known, quietly but firmly, that this is what all Christian communities need to practice on this night in obedience to our Lord’s command.

Particularly when initiating this rite in a local assembly, it is preferable for the presider to go to the people rather than vice-versa. This method is a more complete modeling of servanthood.

Music should always be used throughout the foot-washing to engaged those in worship who are waiting their turn. ‘My song is love unknown’ or ‘Ubi Caritas’ are good choices.

The Eucharist follows, beginning with the narrative of Paul’s first letter to the Corinthians, the earliest account we have of the institution of the Eucharist. Once the eucharistic elements have been consumed (with some put in reserve for the altar of repose), the vessels and candles are cleared away, the community says the post-communion prayer. The mood then changes to a darker tone as we move into the stripping of the altar and The Gethsemane Watch leading through to Good Friday.

Richard Giles served as Dean of Philadelphia Cathedral from 1999-2008 and is known for his creative and transforming liturgies. He now lives in Tynemouth, England. This article is from his book, Times and Seasons: Creating Transformative Worship Throughout the Year (Church Publishing, 2008).