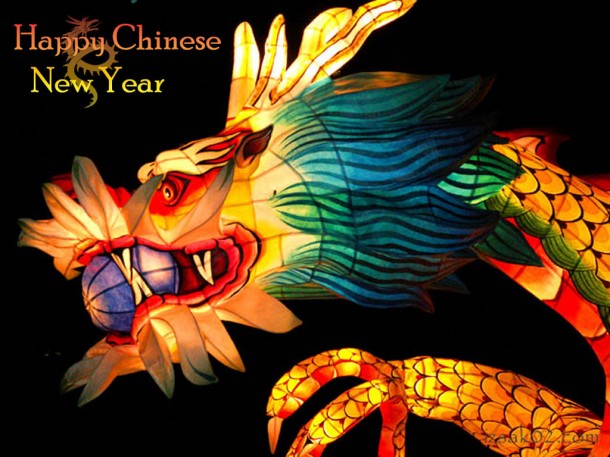 The Chinese New Year (also called the Lunar New Year) occurs in the early months of our calendar year, typically January or February.

In Chinese tradition, each year is dedicated to a specific animal. The Dragon, Horse, Monkey, Rat, Boar, Rabbit, Dog, Rooster, Ox, Tiger, Snake, and Ram are the twelve animals that are part of this tradition. In 2012, the Dragon is welcomed back after the 2011 year of the Rabbit. Each of these animals are thought to bestow their characteristics to the people born in their year.

There are many Chinese legends and stories told on New Years. The Kitchen God is honored each New Year when families give him food to keep his mouth too full to speak ill of them. Common traditions include giving the Kitchen God sweet cakes, or by hanging a poster that the family can rub a small amount of honey on during the first morning of the New Year. There are many Chinese legends and stories, but these are passed down from generation to generation each year.

According to tales and legends, the beginning of Chinese New Year started with the fight against a mythical beast called the Nian (Chinese: 年; pinyin: nián). Nian would come on the first day of New Year to eat livestock, crops, and even villagers, especially children. To protect themselves, the villagers would put food in front of their doors at the beginning of every year. It was believed that after the Nian ate the food they prepared, it wouldn’t attack any more people. One time, people saw that the Nian was scared away by a little child wearing red. The villagers then understood that the Nian was afraid of the colour red. Hence, every time when the New Year was about to come, the villagers would hang red lanterns and red spring scrolls on windows and doors. People also used firecrackers to frighten away the Nian. From then on, Nian never came to the village again. The Nian was eventually captured by Hongjun Laozu, an ancient Taoist monk. The Nian became Hongjun Laozu’s mount.

The first day of the New Year is for the welcoming of the deities of the heavens and earth, officially beginning at midnight. Many people, especially Buddhists, abstain from meat consumption on the first day because it is believed that this will ensure longevity for them. Some consider lighting fires and using knives to be bad luck on New Year’s Day, so all food to be consumed is cooked the days before. On this day, it is considered bad luck to clean.

Most importantly, the first day of Chinese New Year is a time to honor one’s elders and families visit the oldest and most senior members of their extended families, usually their parents, grandparents and great-grandparents.

In China, the New Year is a time of family reunion. Family members gather at each other’s homes for visits and shared meals, most significantly a feast on New Year’s Eve. In the United States, however, many early Chinese immigrants arrived without their families, and found a sense of community through neighborhood associations instead. Today, many Chinese-American neighborhood associations host banquets and other New Year events.

The lantern festival is held on the fifteenth day of the first lunar month. Some of the lanterns may be works of art, painted with birds, animals, flowers, zodiac signs, and scenes from legend and history. People hang glowing lanterns in temples, and carry lanterns to an evening parade under the light of the full moon.  According to the book Moonbeams, Dumplings & Dragon Boats by Nina Simonds, Leslie Swartz, and the Children’s Museum, Boston, the Lantern Festival honors the first full moon of the year and represents the coming of springtime.

Families will light lanterns, which symbolize the brightness of spring, and hang them on walls around the house, or on poles to be carried in lantern parades.

In many areas the highlight of the lantern festival is the dragon dance. The dragon—which might stretch a hundred feet long—is typically made of silk, paper, and bamboo. Traditionally the dragon is held aloft by young men who dance as they guide the colorful beast through the streets. In the United States, where the New Year is celebrated with a shortened schedule, the dragon dance always takes place on a weekend. In addition, many Chinese-American communities have added American parade elements such as marching bands and floats.

In the Tune of Brahma, Shakyamuni Buddha mentioned the 10 benefits of offering lights:

The offering of light is a means of dispelling the darkness of our own ignorance, giving rise to clarity and wisdom. We offer them with the wish that their light will illuminate the lower realms and the bardo, assuaging the torment of beings who suffer in darkness. We also aspire that all beings will develop greater mental clarity in order to discover the causes of long-lasting happiness in virtuous actions of body, speech and mind. Finally, we offer them so that the inner light of great knowing will arise in the minds of all beings and remove the darkness of ignorance and intellectual obscuration.

Epiphany Through the Eyes of Children