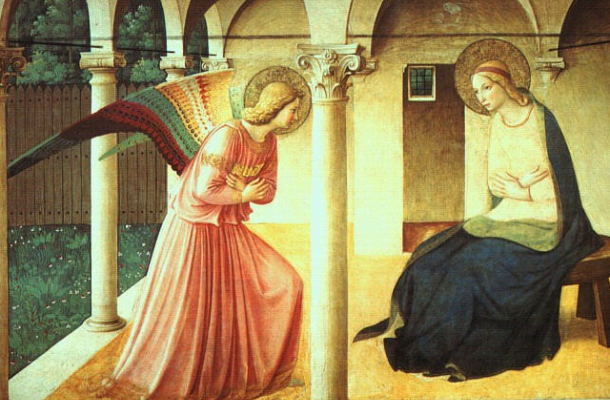 Each of the four short plays, around five minutes long, shows different characters and different events in the nativity story. A brief, kid-friendly discussion time is then led, asking the audience what they saw, what it meant, and how they might have felt if they were part of that scene.

A Unique Model for a Christmas Service
Our minister for children and families, Maggie Smith, is always looking for fresh ways to lead children into experiences of God. Her format for our Christmas Eve Family Service, held at 5:00 p.m. Christmas Eve, has been a real hit, bringing in a larger crowd than just our families with young children.

We begin our service in the sanctuary, with the pastor welcoming all and explaining how this service will be different. The congregation is then divided into four groups, and a guide for each group ushers them out of the sanctuary, singing a Christmas carol as they walk. Each group is taken to a different location in the church, where they watch a different scene acted out from the nativity story.

Each of the four short plays, around five minutes long, shows different characters and different events in the nativity story. A brief, kid-friendly discussion time is then led, asking the audience what they saw, what it meant, and how they might have felt if they were part of that scene.  Then the groups rotate to another play, once again singing a carol. The service ends with all returning to the sanctuary after they have viewed all four scenes, where the pastor speaks briefly and a final carol is sung.

Besides the obvious benefits of giving children plenty to do and see, this service has provided a wonderful outreach opportunity.  Many families invite their extended families to join them for the service before having a Christmas Eve meal together. It is gratifying to see grandmas, grandpas, parents and children of all ages sitting and standing together as they watch the scenes.

Tips for Preparation
Obviously, this kind of service calls for some advance preparation. In early October a leadership group brainstorms a theme for the service. Last year it was “How will you respond to the good news?” and every scene depicted a different response to the news of the birth of the Christ:

Some years we have had one writer for all scenes; last year we had different writers. Scenes can be traditional, with biblical costume, or can use contemporary language and even contemporary settings. The people who guide the groups from place to place have an important hospitality role to play; greeting and welcoming their group as it first gathers in the sanctuary, and making sure everyone is comfortable to view the scenes in the four different settings.  These guides can be the discussion leaders following the plays, or you can have separate people to do that; one staying at each location and working with all four audiences.

Rehearsal Time
The quality of the dramas is key to the success of the evening, so keep in mind the guideline that there should be about an hour of rehearsal per minute of performance. That means a five minute scene needs two, two and a half hour rehearsals. And that is after people have memorized their lines. Timed scripts should be finished by the beginning of September, so there is plenty of time to cast parts and plan two rehearsals before Christmas. Keep in mind that many students have testing in December, and this limits their availability. We have always used a mix of all ages in the scenes, making it a fun intergenerational event. The advantage of having four separate scenes rather than a unified play, is that no one has to rehearse more than five minutes of material, and smaller groups of people can plan rehearsals separate from each other.

However, it is necessary that within a few days of Christmas Eve, everyone involved show up for a complete run-through of the service. This is needed to get all the logistics of moving people around together, to give the musicians (if you use them) time to practice in the different spaces for the traveling music, and a chance for everyone involved to see all four plays for themselves. Make sure this time includes prayer for the service and those coming.

Colleen Scheid is a member of “Friends of the Groom” theater company, and a freelance writer of drama, articles and fiction.