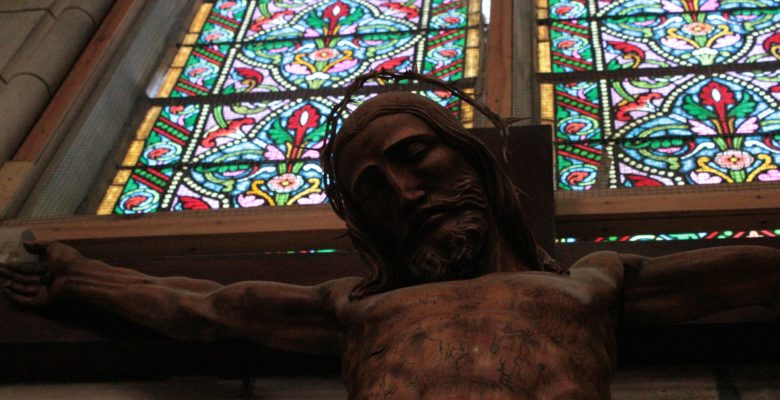 The Passion on Film
I don’t like Jesus movies.  Even as a child, I found myself confused and disappointed in the cinematic portrayals of the life and times of Jesus.  My first memory of a Jesus movie was George Steven’s The Greatest Story Ever Told (1965).  I don’t remember much about the movie, but I remember thinking it couldn’t be right.  Even at age eight I knew Jesus lived a long time ago in a far away, harsh land, and this too pretty, too American movie didn’t convey that.

Around the same time my family watched Pasolini’s The Gospel According to Saint Matthew, and that Jesus felt like a Vietnam revolutionary to me.  When I was a teenager, Frank Zeffirelli’s six hour Jesus of Nazareth depicted a British speaking, blue-eyed Jesus, and my pseudo-academic, arrogant self could hardly stand to watch.  After Scorsese’s and Gibson’s Jesus movies, I made a promise to myself that I wouldn’t watch another one.  I broke that promise last week when I was invited to the premiere showing of Christopher Spencer’s The Son of God.  Although predictably disappointed in the movie as a whole, I left the theater with a new appreciation for one aspect of the context of the Jesus narrative: the Roman occupation of Judea.

In this movie, Jewish life under Roman rule was emphasized.  Although Jews were not forbidden to practice their religion, they were oppressed: taxed harshly, misunderstood, unfairly arrested and tortured, and in general kept down. They were oppressed simply for being born a certain way, in this case as Jews.  One has to have a fearful, hateful, vile, brutal heart to be an oppressor and the movie did a good job of depicting this. The complete lack of compassion for and connection to other humans was palpable as the Roman guards did their job, violently keeping the Jews in line. The Jews were objects, not people.

I was also reminded of the power and greed the Jewish authorities had. Caiaphas and his council worked to protect all the wealth and power that was theirs.  They were not acting out of love for their people or their religion and certainly not out of love of God.  They were elected rulers protecting their rule, their privilege, their wealth, and their status, all of which Jesus’s message threatened.

Father Forgive Them
“Father forgive them, for they do not what they are doing.” These words were spoken by Jesus from the cross, where, in this movie, Roman guards and a few Jewish on-lookers stood.  I am not a Roman soldier or a Jew who asked for Jesus to be crucified.  But I know I am an oppressor when I put other people down, when I hurt them physically, emotionally, or spiritually.  We are, each of us, oppressors, when we don’t treat other human beings with respect, dignity, and a sense of belonging. We are the oppressors who need God’s forgiveness.

We are oppressors when we allow fear to rule our hearts and our decisions.  I have heard it said that we can make all of our decisions from one of two perspectives: out of fear or out of love.  “Father, forgive us, for we know not what we do,” when we make our decisions out of fear.  Fear of losing our privilege, our power, our rule, our comfort, our assuredness, our religion.

Jesus didn’t say, “I forgive you.”  He had already been accused of blasphemy for telling people that their sins were forgiven.  Only God, the Jewish authorities said, could forgive sins.  Perhaps he knew if he forgave them from the cross, it would be dismissed as blasphemy again.  So Jesus said, “Father, forgive them, for they do not know what they are doing.”  He made it clear, we need God’s forgiveness when we make decisions out of fear, out of a need to oppress, out of fear of losing our position of power, out of a fear of change.

The world is full of realities we do not like or understand.  Our fear of them and our unwillingness to be challenged and changed by them makes us oppressors. But the cross shows us a new possibility.  Love is stronger than fear and life is stronger than death.  We desperately need God’s forgiveness if we believe anything else.