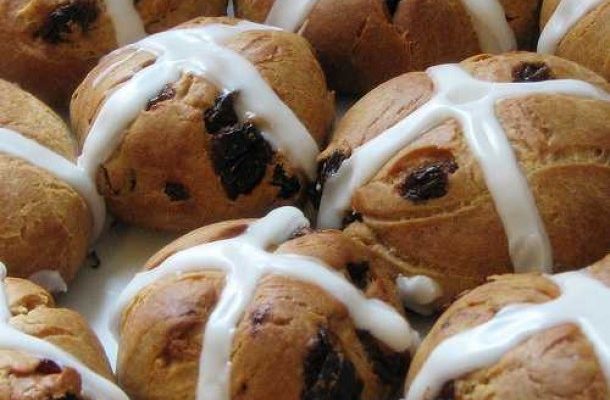 It is one of the peculiarities of the observance of the great fast of Lent that several of the customs surrounding it have to do with food:  pretzels, simnel cake, and hot cross buns.  Hot cross buns are perhaps the strangest of these customs as they are sweet rolls that are eaten on the most important fast of all, Good Friday.

The origins of this very English custom are not entirely clear.  It has been suggested that hot cross buns originated in the pagan cult that preceded Christianity in Britain.  But the earliest historical mention of them is traced to a 12th century English monk who is said to have marked buns with the sign of the cross in honor of Good Friday.  A 14th century record tells how a monk of St. Albans distributed spiced cakes to the needy on Good Friday, inaugurating an annual tradition, though he carefully guarded his recipe.

Whatever their origins, there were certainly ideas associated with these buns that some would regard as superstitions.  Hot cross buns were eaten after sundown to break the Good Friday fast. In the Middle Ages, they were believed to have powers of protection and healing.  People would hang a hot cross bun from the rafters of their homes for protection through the coming year.  And if someone was sick, some of the dried bun would be ground into powder and mixed with water for the sick person to drink.

In the reign of Elizabeth I, when Roman Catholicism was banned, making the sign of the cross on the buns was regarded as popery and the practice was banned.  But neither Church nor State could suppress the popular custom, so legislation was enacted to limit consumption of hot cross buns to legitimate religious occasions such as Christmas, Easter, and funerals.  The familiar nursery rhyme, “Hot cross buns,” derives from the call of the street vendors who sold them.

There are various recipes for the buns, but an authentic recipe should include currants and a cross either incised on the top of the buns or painted on with a sweet glaze.  Here’s a recipe to make your own hot cross buns.