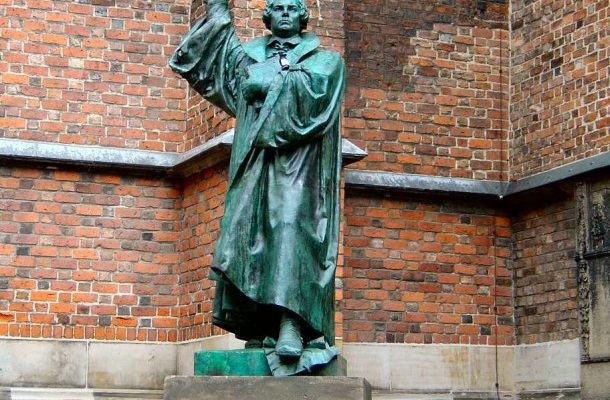 “Christ is being preached in the gospel and is growing and increasing in the world. But his is a strange growing, one that looks to the world like something withering and perishing. For we find the cross of Christ in it and all kinds of persecutions. But we also find pure growth in it; for in the midst of death there is life, in poverty riches, in disgrace honor, and so forth – amidst evil there is sheer goodness.” Martin Luther

On today’s Christian calendar we remember Martin Luther: Renewer of the Church. One of the most prominent figures of the Protestant Reformation, Luther was born in Eisleben, Saxony in 1483. His father had hoped he would be a lawyer, so Martin enrolled at the University of Erfurt earning a master’s degree in 1505. Following that he then began his study of law. The pursuit was short-lived. In July of 1505 he joined an Augustinian monastery and began preparing for the priesthood. He was ordained on April 3, 1507.

Luther earned a doctor’s degree in theology in 1512 and accepted a position as professor of biblical studies at the University of Wittenberg. He was a well-liked lecturer and his reputation began to grow. His personal struggle with faith led him to search scripture for a better understanding of salvation. As a result, he became convinced that the church was leading people astray. The selling of indulgences was one practice that Luther attacked. He posted ninety-five theses on the door of the castle church on October 31, 1517. He was hoping to prompt a debate concerning this practice, among other things.

When the pope learned of Luther’s action, he ordered the Augustinians to censure the priest. Luther rejected the criticism, but he publicly acknowledged that he was critical of some official church doctrines. Because of his intransigence he was excommunicated on January 3, 1521. Elector Frederick of Saxony had Luther kidnapped for his own safety.

For more than a year Luther was housed at the Wartburg Castle. While there he translated the Bible into German, effectively establishing the written form of the language. His views were responsible for initiating the Protestant Reformation.

Luther began the practice of congregational singing and saying the Mass in the vernacular. He published the large and small catechisms and numerous sermons. The printing press, recently developed by Gutenberg, helped in spreading Luther’s theology and thought. He was an author of immense importance. He is remembered for his uncompromising faith. Luther’s commitment to reforming church doctrine and recovering faithful teaching is a remarkable contribution to evangelical Christianity.

“My conscience is taken captive by God’s word, I cannot and will not recant anything, for to act against our conscience is neither safe for us, nor open to us. On this I take my stand. I can do no other. God help me. Amen.” Martin Luther his final answer to the diet of Worms, 1521

Living the Good News is an ecumenical lectionary-based curriculum for all ages. Published by Morehouse Education Resources, a division of Church Publishing Incorporated, it hosts a support site where free, downloadable materials such as this reflection can be accesses.