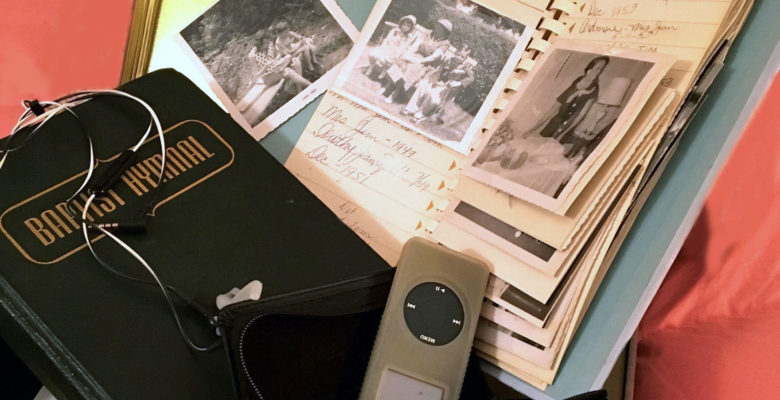 “Memory box items that tap into our deepest memories of childhood are more likely to invoke conversation and even laughter.”

What Is a Memory Box?

Whenever I speak on the topic of spirituality and aging, I often allude to memory boxes. A participant at a conference recently asked for more information about memory boxes:

“I was enchanted by your concept of a ‘memory box.’ I have a brother-in-law with Alzheimer’s now and I realize how helpful it will be to have meaningful visits with him. And my husband and I are beginning to collect fragments of our early lives to build our own memory boxes. I would love more information about this.”

I first encountered the idea of memory boxes from articles written by caregivers of people with dementia. Caregivers, including family, friends and professionals working in nursing homes, described how photos and other mementos provided cues that helped those with dementia access memories from their childhoods.

At the time that I was reading about memory boxes, I was co-teaching a course about aging at Virginia Theological Seminary. During class we talked about how the writing of spiritual autobiographies unlocked memories of older people and gave them new understandings of their pasts. Two seminary students later suggested spiritual autobiographies to groups of older parishioners at their churches. In both cases, the older people rejected the idea as being too personal and too difficult.

With this caution in mind, I have resisted the urge to suggest spiritual autobiographies at my workshops. Before a women’s retreat in North Carolina, I can remember being lost in prayer when the Holy Spirit broke through. What if we used memory boxes as a gentle tool in helping participants to share their stories, their joys and their losses, their strengths and their fears?

I tested the process with a local group of people, asking them to bring different kinds of memory cues —photos, written stories, and music — that they might include in their own memory boxes. The impact was immediate. One participant whose mother had dementia told me that memory boxes gave her hope to counteract her fear about losing control of her life. She explained, “A memory box would let me decide which memories from my childhood give me the greatest pleasure.”

Gather Items
As you select the contents of a memory box, realize that some items will not spark a response, while other items will. As a general rule, mementos from early childhood create some of the strongest responses.

When my father who was diagnosed with Alzheimer’s moved across the country to be with me, I carefully packed the items I thought he would most like to have around him. The certificates and honors that were so important to him as an adult were meaningless. Even photos of my mother, to whom he was married for over 50 years, sparked no memories.

However, his painting of the house where he lived as a child, a battered photo of students who attended his one-room schoolhouse, which included his neighbors and two brothers, and the stories of his cousins would always bring a smile to his face. He often added stories of his own from that long-ago time.

Learn As You Go
When possible, when making a memory box for another person include them in your quest for items and talk openly about what you are doing. Show your loved one photos to see which elicit a response. Memory box items that tap into our deepest memories of childhood are more likely to invoke conversation and even laughter.

Include Music
Find an ipod or other music device and place it in the memory box. Play music that might speak to your loved one. As wires reconnect, even momentarily, you might see a person “restored to themself.”

Start Your Own Memory Box

If you are an adult anxious about your own potential memory loss, begin the process of making a memory box for yourself.  I often add or subtract items from my own memory box. I’ve even included specific instructions to go with stories I’ve written or photos I’ve selected. For example, I ask that my caregiver set a bowl of fresh raspberries in the sun before reading a certain story – I know the taste and scent of the warm berries will connect with me in deep ways.

What will you put in your memory box?

The featured image is of the author’s own memory box. All rights reserved.

A version of this article was first published on Key Resources in 2016.