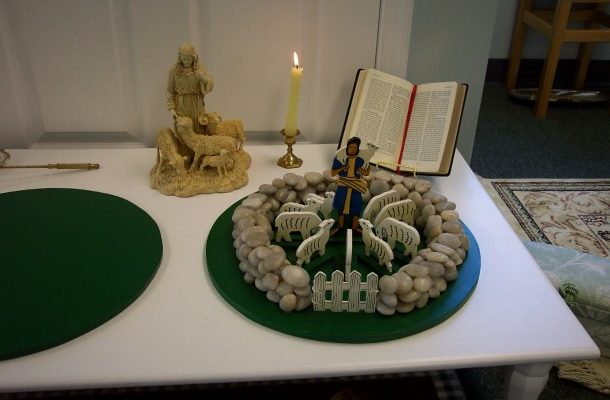 “Today, many churches follow a faith formation model using the Montessori approach…. They offer an experiential means for a child to deeper their relationship with God and learn the language of faith.”

What is the Montessori Approach?
Montessori education is an educational approach developed by Italian physician and educator Maria Montessori (1870–1952). She was the first woman to graduate with a medical degree in modern Italy (1896), and in 1910 committed herself entirely to education. Montessori education is characterized by an emphasis on independence, freedom within limits, and respect for a child’s natural psychological development.

Montessori continued to extend her work during her lifetime, developing a comprehensive model of psychological development from birth to age 24, as well as educational approaches for children ages 0–3, 3–6, and 6–12. She wrote and lectured about ages 12 to 18 and beyond, but these programs were not developed during her lifetime. She felt that the spiritual formation of the child was at the heart of her work.

The Prepared Environment
Montessori’s education method called for free activity within a “prepared environment”, meaning an educational environment tailored to basic human characteristics and to the specific characteristics of children at different ages. The function of the environment is to allow the child to develop independence in all areas according to his or her inner psychological directives. In addition to offering access to the Montessori materials appropriate to the age of the children, the environment should exhibit the following characteristics:

Passing the Torch
The “second generation” of the Montessori tradition was started by E.M. Standing (1887-1967). Standing wrote wrote Child in the Church (1965). In 1963, Sophia Cavalletti (the “third generation”) set up The Maria Montessori Association for the Religious Formation of the Child. Today it is the center of a worldwide organization, which in the United States is known as The Catechesis of the Good Shepherd.

As for the “fourth generation” Jerome Berryman is considered a representative, having studied at the Center for Advanced Montessori Studies in Bergamo, Italy (1971-72). His work, Godly Play, is an effort not to reproduce but to carry forward the work of his teacher, Sophia Cavelletti and the preceding generations.

Today, many churches follow a faith formation model using the Montessori approach. All based on the above described principals, they offer an experiential means for a child to deeper their relationship with God and learn the language of faith. Various models have been developed from a variety of denominational perspectives, each with a deep respect for the spiritual life of the child.

Catechesis of the Good Shepherd was founded by Sophia Cavalletti with her colleague, Gianna Gobbi. It is an approach to the religious formation of children that is rooted in the Bible, the liturgy of the church and the principles of Maria Montessori. It’s goals are to help the child encounter and explore the mystery of God by his or herself, understanding that they already have a relationship with God as they prepare for their First Holy Communion.

The image presented of God is as Christ the Good Shepherd, who knows his sheep, calls them by name, and gives everything that he is for them. Catechesis begins with the reality of Christ, and everything else finds its meaning in Him. Stories begin with the New Testament – the Good Shepherd, and builds to include the Christian message. Catechists leader children in levels (I: 3-6 years: Level II 6-9 years; Level III 9-12 years) in the Atrium.

Godly Play was developed by Jerome Berryman. A spiral curriculum of playful orthodoxy helps a child create meaning with wondering questions, giving them space to safely confront their existential limits and ethical issues. It seeks to help children engage the Christian language system in their play with God and the community of children. God is creator, who with the child, play together.

Sacred stories (Old & New Testament), parables, liturgical actions and contemplative silence are told in core stories, followed by enrichment lessons for the older, more experienced child. A Godly Play classroom for 3-12 years guided by a Storyteller and Doorperson is the setting.

Children and Worship was created to make a very place where Children can come to encounter God. To be still with God and to listen to God. It is a place where children come to nurture their spiritual life. Further developed by Sonja Stewart in the Reformed tradition, God is the source of all and desires his creation to follow Christ. Old and New Testament stories of the people of God are told in the context of a worship setting. A Worship Center is the setting for children ages 3-8 years.

The Way of the Child recognizes that children have an innate spirituality with a natural acceptance of mystery, an amazing capacity for awe, a vital imagination, a longing to be their unique selves, and an ability to be open to and receive God’s love. The Way of the Child came to life when Wynn McGregor had a vision to engage children in spiritual practice. Wynn was a part of a Companions (Upper Room) group, and the spiritual practices and community life she experienced there fostered in her a desire to offer a formational experience for children.

The Way of the Child, designed for ages 6-11, calls children to recognize their own relationship with God and to create quiet space in which to listen. With 39 modules that can be used as a whole or in sections, The Way of the Child guides both small and large churches in helping children create habits of spiritual practice.