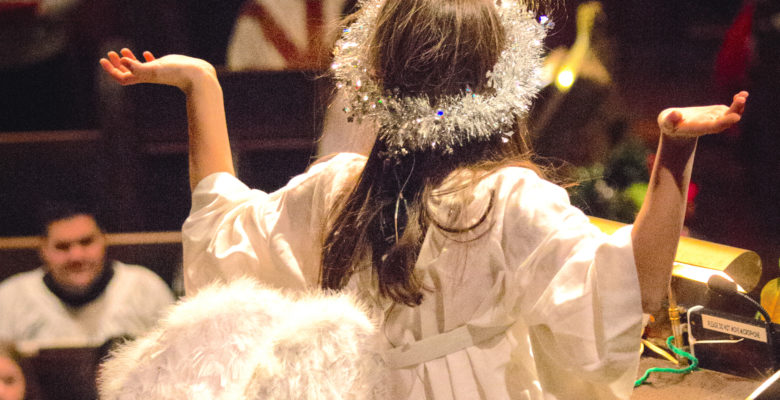 “My experience as a priest turned director is that the children stepped up to expectations and challenges with good spirit and pleasure.”

Editors note: This is part II of Donald’s description of the Christmas pageant at St. Gregory of Nyssa.

Balancing the Commitment
Children (or an inter-generational cast) in a pageant have a “unique opportunity to communicate the Gospel lesson to the community in a special way.”

In the crazy days before Christmas, some families actually appreciate displacing some of the things that make Christmas a frantically busy time.  They appreciate the continuing focus on Christmas and on making something together, feeling it redefines their family’s Christmas.  Not everyone can or is willing to make the commitment to rehearsals.  And some families go visit extended family or friends over Christmas.

At St. Gregory of Nyssa in San Francisco we had some who still wanted to help produce the pageant and would do costume or snacks. Or we had kids and kids and parents who had to be away on Christmas Eve and couldn’t be in the Pageant who’d come to watch the final rehearsal on the last rehearsal day.

There are lots of different ways to structure, ask for and support that commitment.  We worked with four to five rehearsals, Saturdays 9 until noon (often including a final weekday rehearsal in children’s Christmas vacation).  But only major parts needed to commit to the full rehearsal schedule.

Tips for Planning Rehearsals
Early communication. Before asking who wanted to be in the pageant, we’d build a rehearsal schedule noting which characters are needed when.  That schedule went out to all parents and children with the invitation to request specific parts or speaking/non-speaking parts as they could fulfill the rehearsals required.

Then we’d go through the responses and think about children’s ages, what they’d already done, whether they’d be good in a part a year later, and so on.  They knew we’d make a selection and let them all know.  And we’d let them know the whole casting at once.

Structured rehearsals. In our way of scheduling and planning rehearsals, the number of our actors might grow from (for example) Mary, Joseph, Angel Gabriel and Zachariah at a first rehearsal, to that group plus Magi (if, for example choreography but no lines) and an innkeeper, until the last rehearsal would include shepherds and senior angels guiding sheep and smaller angels.

We made some minor speaking parts that could come to the last two rehearsals.  Our advance notice to parents and children listed the commitment to rehearsal that various parts would require.  Our response to “I want to be Mary but I can only make the last rehearsal,” was always – “maybe another year.”

Expect a commitment. Parents and children signed and agreed to be at rehearsals, to come on time, stay to the end, and parents agreed to coach children on learning their lines at home.  There’s another formational process built in there.  We heard wonderful and very interesting things about conversations children and parents had about the Christmas story in the context of parents helping their children learn lines.

Reflections from the director
My experience of the production as a priest turned director is that the children stepped up to expectations and challenges with good spirit and pleasure.  I told them that for the duration of rehearsals, I’d be treating them as actors (and calling them that), and that I’d be their director and pushing them to give their best.

I and my co-directors were determined to make real demands on our actors for their sake, because it’s respectful to entrust something to them and ask them to live into the trust, and because, as we told them, people would be coming to church because they hoped the story would touch or move them.  I believe we filled our direction role with kindness, but the demand was also consistent and clear.

Pageant Scripts
We worked with a variety of scripts of our own making over the years.  Our first scripts stuck pretty close to the texts of Matthew and Luke, excerpting, including narrative voice (and sometimes mimed action) and getting the actors to speak lines as quoted in scripture.  Like the early evolution of theater in the medieval church, our plays begun to elaborate scenes past scriptural text.  We imagined specific characters and gave them a few words that fit the scene.

Our structure was always a series of scenes with the congregation singing verses from Christmas carols between them.

Donald Schell has founded and developed the urban congregation of St. Gregory’s from an organizing dozen members to a parish with national recognition for its innovative approaches to liturgy and mission and its teaching contribution to the wider church. In 2007, Donald joined All Saints Company full time in order to consult, publish, and lead workshops on the discoveries made at St. Gregory’s. Donald has written My Father, My Daughter: Pilgrims on the Road to Santiago and has contributed chapters to Searching for Sacred Space, to What Would Jesus Sing? and to Music By Heart: Paperless Songs for Evening Worship. This article began as a conversation on the Forma list-serve.