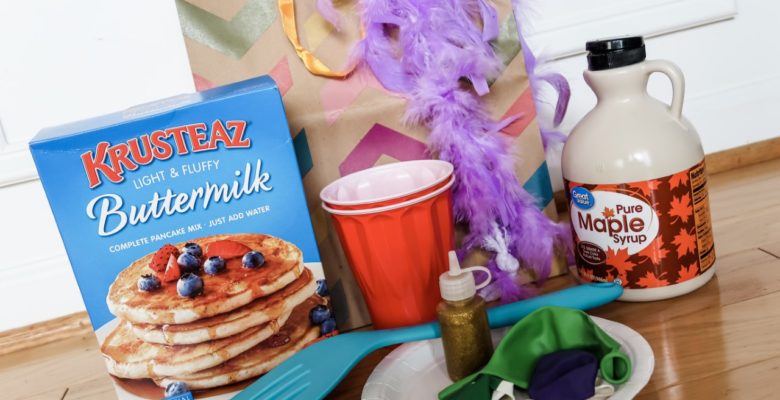 Many churches celebrate Shrove Tuesday with a big pancake supper. If your church does not do a pancake supper, or you know some families won’t be able to attend, you can encourage folks to celebrate together at home!

On the Sunday prior to Shrove Tuesday, or earlier, offer take home “Shrove Tuesday Party Packs.” Here are some ideas of what to include:

Party Invitation
Gather your family and friends for a pancake meal the day before Ash Wednesday, the beginning of Lent. Historically, Shrove Tuesday was a time to feast before fasting during Lent. Traditionally, Shrove Tuesday has been a time to party under other names, such as, Fat Tuesday, Mardi Gras, and Pancake Day. While you feast on pancakes, consider decorating your dining area in the Mardi Gras colors of purple and green, play a few games, and make a playful craft to be used during Lent. Don’t forget to laugh and have fun.

A Photo Release
Include a photo release form and ask families to take a picture of their party to post on your church’s social media. Make sure to include instructions on where to send or post photos.

Pancake Mix & Syrup
You can buy pancake mix or make and bag your own. Maple syrup can be expensive. You might want to ask a few folks to donate six mini bottles each or you can purchase small bottles in bulk for $2.75 each.

Party Game Suggestions
Every good party needs games! Include some game ideas and the required supplies.

Craft for Lent: Paper Plate Prayer Labyrinth
Use puff paint to create a maze on a paper plate. During Lent, family members can trace the lines of puff paint with one finger as they say a prayer.

Game & Craft Supplies
Make sure to include supplies for the games and crafts you suggest. The games and crafts in this post require:
2 Purple & 2 green balloons
2 Plastic cups
2 Feathers
5 White paper plates (depending on largest family size)
1 Bottle of puff paint

The Pancake Flop Game
Divide the players into teams of two. One player sits in a chair at a table, with a plate in front of them. Their team member stands holding a kitchen turner, at the opposite end of the table, with a plate holding three cold pancakes. Set a timer for one minute. The object of the game is for the player holding the kitchen turner to fling a pancake towards their teammate who must then catch the pancake with their face and land the pancake onto the empty plate in front of them. The team with the most pancakes on their plate at the end of one minute wins the game. Watch this game played on Youtube.

The Feather Float Game
Give each player one feather. The player to keep the feather floating in the air, by blowing on it, for the longest time is the winner. If your feather touches the ground, you are eliminated from the game. Watch this game played on Youtube.