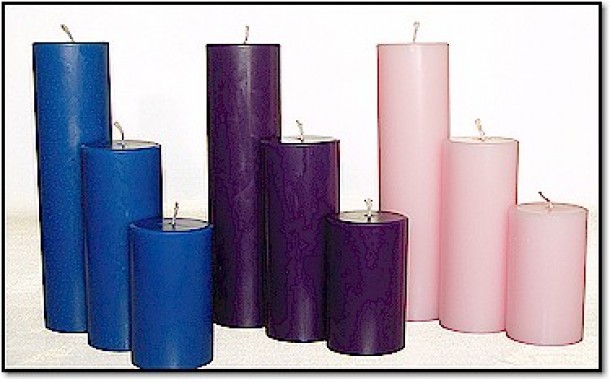 Advent means “coming” in Latin. In Greek, it is translated from parousia, commonly used in reference to the Second Coming of the Messiah. It is a season of preparation, to prepare the way of the Lord.

Advent is the beginning of the Church Year for most churches in Western tradition.  It begins on the fourth Sunday before Christmas Day, which is the Sunday nearest November 30th, and ends on Christmas Eve, December 24th. The focus of the entire season is the celebration of the birth of Jesus the Christ in his First Advent, and the anticipation of the return of Christ the King in his Second Advent.

Scripture readings during Advent reflect themes of hope of eternal life as well as accountability for our faithfulness. Looking back to the past and the birth of Christ as well as the future of Christ’s coming again, Advent can be a season of spiritual journey for individuals as well as congregations as we wait in a spirit of expectation, anticipation, preparation, and longing. Each year we await the rebirth of Christ when the world will be reconciled with God. The Anointed One, a Messiah, will bring peace, justice, and righteousness to the world.

For the Eastern Orthodox Church, Advent has been a time of fasting and penitence, similar to Lent.  So, while some church traditions focus on penitence during Advent, which is still appropriate, the spirit of that expectation from the Old Testament is better captured with a joyous sense of expectancy. Rather than a time of mourning and fasting, Advent is celebrated as a time of joy and happiness as we await the coming of the King.

The traditions of Advent include the color of dark “royal” purple or Sarum blue (from the Medieval Sarum rite). Both symbolize preparation, penitence and royalty to welcome the new King. The purple of Advent is also the color of suffering used during Lent and Holy Week. This points to an important connection between Jesus’ birth and death.

The nativity, the Incarnation, cannot be separated from the crucifixion. The purpose of Jesus’ coming into the world, of the “Word made flesh” and dwelling among us, is to reveal God and His grace to the world through Jesus’ life and teaching, but also through his suffering, death, and resurrection. To reflect this emphasis, originally Advent was a time of penitence and fasting, much as the Season of Lent and so shared the color of Lent.

In the four weeks of Advent the third Sunday came to be a time of rejoicing that the fasting was almost over. Gaudette Sunday (“Rejoice,” from an ancient antiphon based on Philippians 4:4) has an especially joyous emphasis, so often rose (pink) as a symbol of joy is seen to replace the purple. The shift for this Sunday reflects this lessening emphasis on penitence as attention turned more to celebration of the season.

In recent times, however, Advent has undergone a shift in emphasis, reflected in a change of colors used in many churches.  Many Protestant churches now use blue to distinguish the Season of Advent from Lent. Royal Blue is sometimes used as a symbol of royalty.

Some churches use Bright Blue to symbolize the night sky, the anticipation of the impending announcement of the King’s coming, or to symbolize the waters of Genesis 1, the beginning of a new creation. Some churches, including some Catholic churches, use blue violet (Sarum blue) to preserve the traditional use of purple while providing a visual distinction between the purple or red violet of Lent.

What About Red and Green?

Red and Green are more secular colors of Christmas. They derive from older European practices of using evergreens and holly to symbolize ongoing life and hope that Christ’s birth brings into a cold world. Although red and green are often used as part of the church decorations, they are never used as liturgical colors during Advent since those colors have other uses in other parts of the church year.