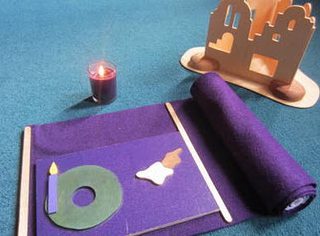 “A prophet is someone who tells the truth no matter how difficult telling the truth might be. Every child understands that clearly.”

Advent Song for Godly Play Lesson
“Show the Way” is a simple song with a kind of pop/Vineyard feel to it. I wrote it last year for the Godly Play lesson titled “The Prophets Show the Way to Bethlehem” which is the Advent One story. Children learn it quickly and it also opens up as a kind of “zipper” song – there are no rhymes so children can easily contribute to ways they can “show the way to God.”

Here is a video to this song:

This video also offers an answer to a question a number of Sunday School volunteers encounter when teaching about the prophets. During this season when the prophets are an integral part of the weekly readings and arts, it’s important to help children frame prophetic writing and the role of a prophet.

I learned another way to explain the role of a prophet to young children when picking my daughter up during her first year at nursery school. It was early January. There were two poster-sized photographs of Rosa Parks and Dr. Martin Luther King on the wall. I asked my daughter if she knew who those two people were. She said “I forget their names but they did something very important. They said ‘That’s not fair!’”

“That’s not fair.” The role of the prophet and prophetic ministry summed up quite nicely by a three-year-old – guided by the wisdom of the collective faculty and culture at Riverside Church in New York City.

Brook Packard is an educator, musician, and Gaia Women’s Leadership certified life coach in addition to many other creative endeavors. She is the author of When the Bishop Comes to Visit, an Activity Book for All Ages. Brook helps families make bedtime simple and put sleep first at the Sleepytime Club. Sign up for a free guided meditation with illustrated booklet that helps children “Put the Day to Bed.”