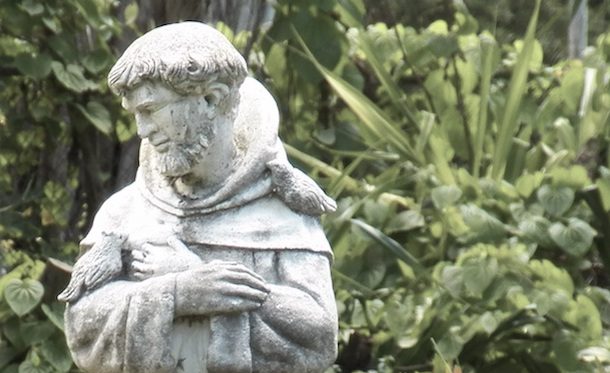 “May we be able to follow in the footprints of Your beloved Son, our Lord Jesus Christ, and, by Your grace alone, may we make our way to You.”

Who Was Francis of Assisi?

Readers may know Francis as the patron saint of animals… or the saint who loved nature. Certainly Francis had a reverence for the natural world, but he was – and is – known for much more. Francis (1181-1226) held a deep and powerful spirituality, centered on his devotion to Jesus Christ. His imitation of Christ led him to poverty, prayer, service, and mission. In Francis’ own lifetime, thousands of men and women were drawn to his movement; and the result was the birth of the Franciscan order.

In the Words of St. Francis

St. Francis himself did not write much, but what he did write (or dictate) is of immense spiritual value. His words were carefully chosen and packed with meaning. The following prayer, which may have originally been a separate composition, is included in a document by Francis called “A Letter to the Entire Order.”

On Ash Wednesday, Building Faith is pleased to share this prayer by St. Francis. May these words inspire you as you begin the journey of Lent.

Almighty, eternal, just and merciful God,
give us miserable ones
the grace to do for You alone
what we know you want us to do
and always to desire what pleases You.
Inwardly cleansed,
interiorly enlightened
and inflamed by the fire of the Holy Spirit,
may we be able to follow
in the footprints of Your beloved Son,
our Lord Jesus Christ,
and, by Your grace alone,
may we make our way to You,
Most High,
Who live and rule
in perfect Trinity and simple Unity,
and are glorified
God almighty,
forever and ever.
Amen.

Francis of Assisi, circa 1225, “A Letter to the Entire Order.” Text from Francis of Assisi: Early Documents, Volume 1. Edited and translated by Regis J. Armstrong, J.A. Wayne Hellmann, and William J. Short (New York: New City Press, 2001). Linebreaks and punctuation are those of the translators.