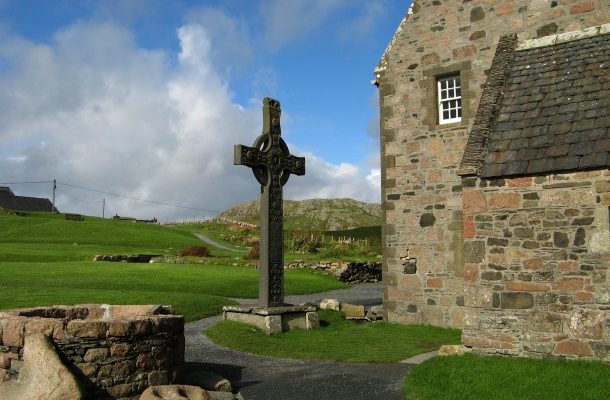 “The Celts creatively blended the two into a unique set of Christian traditions and practices known as Celtic Christianity.”

Celtic Tradition Around Us
Celtic spirituality speaks to the challenges of our times in powerful ways. Generally, Celtic worship activities are more right-brained and emotionally engaging and less talky, perfect for both kids and stressed-out adults. Over the past few years, many congregations across the U.S. have found that Celtic Eucharists and alternative services have boosted their outreach and formation efforts.

Many Christians may be familiar with liturgy influenced by the Celtic tradition. Examples include hymns such as Be Thou My Vision and Morning Has Broken, the New Zealand Book of Common Prayer, or services honoring St. Patrick.

Five years ago, I first got bitten by the Celtic bug during an outdoor evening prayer session with J. Philip Newell at Ghost Ranch in New Mexico. He spoke about the Celtic approach to formation with two books: the big book (nature) and the wee book (the Bible). I was shocked to learn that I had written a book in the Celtic tradition—without my even knowing it. (I am 25% Welsh!) My Faith and Nature curriculum incorporates a Celtic approach to spiritual formation.

Given the Celtic emphasis on the natural world’s role in spiritual formation, summer is the perfect time to consider the lessons we can learn from the Celtic way. Over the summer, we’ll explore how elements of Celtic Christianity can enrich our spiritual formation in daily life and at church, as well as the resources available for ideas and activities.

Some Background Information
First, a little background on the Celtic people. The ancient Celts populated Europe prior to the rise of the Roman Empire. They were known for their creativity, art, and inventions. Eventually they were assimilated into the Roman Empire, except for a small remnant who lived in the British Isles and were never conquered by the Romans.

St. Patrick and other missionaries brought Roman Catholic Christianity to the Celtic lands in the mid-fifth century. As Christianity replaced the indigenous religious traditions, the Celts creatively blended the two into a unique set of Christian traditions and practices known as “Celtic Christianity.” During the dark ages of Europe, Celtic monasteries served as refuges and centers of learning that preserved western civilization’s intellectual heritage.

Some Celtic saints honored in Christianity have proven to be as tenacious as the Celts themselves. Over the past 1,400 years, Celtic Christianity has survived as a living tradition within the Anglican Communion, revered for its focus on spiritual formation around Christ, nature and community. The Celtic approach embraces innovation, which enables the incorporation of science and knowledge into the spiritual tradition.

Some 70% of Americans have a Celtic connection through Irish, Scottish, or Welsh ancestry. Perhaps this is a contributing factor to the popularity of Celtic spirituality.

Resources on Celtic Christianity
A Thin Place: Iona and the Celtic Way is an excellent introduction for all ages and people inside and outside the church. This unique film by James Friedrich uses the luminous landscape of St. Columba’s island of Iona to open a door to the treasury of Celtic wisdom. (25 min.) DVD

A Celtic Model of Ministry: The Reawakening of Community Spirituality by Jerry C. Doherty describes the three major crises of our times (crisis of individualism, crisis of faith, crisis of lifestyle) and how Celtic spirituality can inform our efforts to move beyond them.

Phyllis Strupp is the author of Church Publishing’s Faith and Nature curriculum and the award-winning book “The Richest of Fare: Seeking Spiritual Security in the Sonoran Desert.” She is a CREDO faculty member and lives in Carefree, AZ with her husband and three cats.