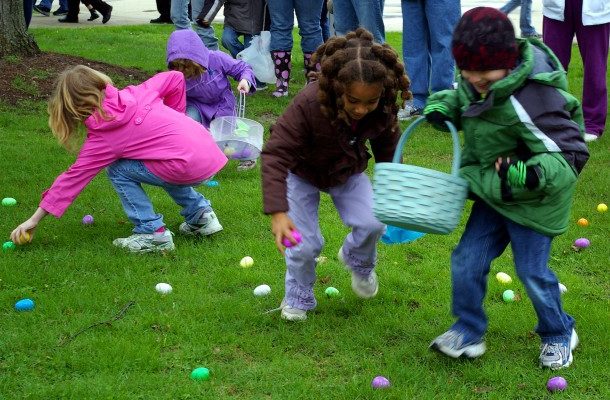 “No sooner had we turned our backs than the same squirrel grabbed a bite-sized candy bar I’d missed, deftly opened the wrapper and scarfed the candy.”

Under Attack!
Our annual Easter Egg Hunt is under attack. Not from parishioners or clergy who question the religiosity of the tradition, nor from the expense of filling plastic eggs with candy, stickers, and tiny toys for a quickly increasing number of children. No, we’re under attack by local wildlife, who after many years of oblivion have suddenly discovered that once a year St. Barnabas holds a smorgasbord served in odd plastic ovals.

Last year, as usual, my mom and I headed to church in the wee hours to hide 400 plastic eggs all over the church grounds. As parishioners in their Sunday best began to stroll towards the front doors, we were finishing, congratulating ourselves for our efforts. As I stood chatting with a middle school youth we watched in incredulity as a squirrel brazenly scurried down the trunk of our large oak tree, grabbed an egg, somehow managed to cram an entire half into his mouth, and sprint for a high branch. Where the critter promptly tried to open his treasure and dropped it fifteen feet, breaking the egg and scattering the goodies formerly held within.

We gathered the evidence, laughing at the small furry daredevil. No sooner had we turned our backs than the same squirrel grabbed a bite-sized candy bar I’d missed, deftly opened the wrapper and scarfed the candy as I wondered aloud if chocolate is as bad for rodents as it is for dogs.

Within minutes it was all-out warfare. Squirrels were racing from trees, from under bushes, from the top of fences and going after our eggs, while birds swooped from above, pecked the eggs open and grabbed as much booty as they could while remaining airborne.

Youth to the Rescue
We were hysterical, even as I began to panic; the service was about to begin and there was no doubt that unguarded, our Easter Egg Hunt would be demolished by the time we returned. I could just envision all those kids and parents trooping out for the hunt only to find shrapnel-like bits of pastel plastic eggs and flutteringly empty candy wrappers littering the yard.

What was a frantic Family Minister to do? Well what are middle school boys for, if not to defend candy from marauding wildlife? With parental permission, I ‘hired’ all my early teen boys to guard the Easter eggs. Happily, Easter falls during lacrosse season so my heroes were armed with sticks and balls, and they happily spent the service outdoors chasing away all four-footed and winged creatures. The hunt began as usual after the service with only minor casualties, although I expect there were bunny stickers on more than a few nests in the area last year.

And the punchline was provided by the parishioner who, upon hearing the story, casually defended the animals; “Well, there is a recession, after all.”