Home/Christmas/What Does This Season Mean? Handout for Christmas at Home 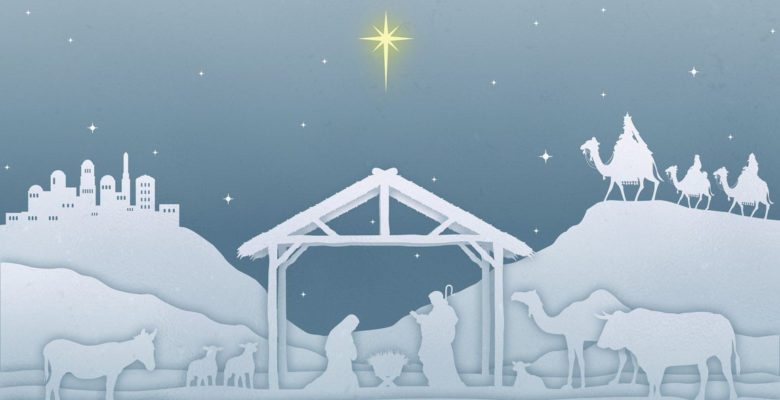 To download this beautiful resource for households that supports the celebration of Christmas at home as a PDF, click here.

Christmas, or The Nativity of Our Lord Jesus Christ, is a season of twelve days when we remember and celebrate Jesus’ birth. Christmas was first celebrated in Rome in 336 CE and slowly spread. The date, December 25, as well as symbols such as candles and lights (symbolizing warmth and lasting life) and evergreens (symbolizing survival) were likely chosen to align with the already-existing pagan celebrations of the winter solstice. Though the various customs of Christmas have many different roots, the deep truth of Christmas, the truth that goes beyond facts or history, is what offers hope for our hearts and souls.

During Christmas we remember the time God was born among us, as one of us, as Jesus. Like Mary — and Joseph, the angels, shepherds, animals, and even the stars — we are invited to be part of giving birth to a new world rooted in love, abundance, generosity, and peace. We are invited to take our place in this sacred story, and invited to catch a glimpse of the holy in people and places we are least expecting it — including our own selves.

In those days a decree went out from Emperor Augustus that all the world should be registered. All went to their own towns to be registered. Joseph also went from the town of Nazareth in Galilee to Judea, to the city of David called Bethlehem, because he was descended from the house and family of David. He went to be registered with Mary, to whom he was engaged and who was expecting a child. While they were there, the time came for her to deliver her child. And she gave birth to her firstborn son and wrapped him in bands of cloth, and laid him in a manger, because there was no place for them in the inn. In that region there were shepherds living in the fields, keeping watch over their flock by night. Then an angel of the Lord stood before them, and the glory of the Lord shone around them, and they were terrified. But the angel said to them, “Do not be afraid; for see—I am bringing you good news of great joy for all the people: to you is born this day in the city of David a Savior, who is the Messiah, the Lord. This will be a sign for you: you will find a child wrapped in bands of cloth and lying in a manger.” And suddenly there was with the angel a multitude of the heavenly host, praising God and saying, “Glory to God in the highest heaven, and on earth peace among those whom he favors!” When the angels had left them and gone into heaven, the shepherds said to one another, “Let us go now to Bethlehem and see this thing that has taken place, which the Lord has made known to us.” So they went with haste and found Mary and Joseph, and the child lying in the manger. When they saw this, they made known what had been told them about this child; and all who heard it were amazed at what the shepherds told them. (Luke 2:1-19)

Tradition credits Saint Francis with creating the first Nativity scene with live animals in 1223. From Italy, the Nativity was adapted and scene spread quickly. Some swapped out live animals for figurines, some added characters like the shepherds and magi. We too can create our own Nativities with what we have: toys, dolls, art supplies, maybe even your pets. Or dress up yourself as your favorite character from the story and act it out. Consider drawing out the scene and posting your artwork. If you have a Nativity with figurines, you can move and rearrange the scene during the twelve days of Christmas. What might the lives of the characters have been like? Which characters are your favorites and why?

Almighty God, you have poured upon us the new light of your incarnate Word: Grant that this light, enkindled in our hearts, may shine forth in our lives; through Jesus Christ our Lord, who lives and reigns with you, in the unity of the Holy Spirit, one God, now and forever. Amen.

Singing has been described as “praying twice.” Music is a big part of telling, sharing, and celebrating the Christmas story. Sing or play one of your favorite Christmas hymns or songs. What part of the story do you most like lifting up in song?

For More On Christmas

To download this beautiful resource for households that supports the celebration of Christmas at home as a PDF, click here.