Home/Holy Week/What does this day mean? Handout for Good Friday at Home 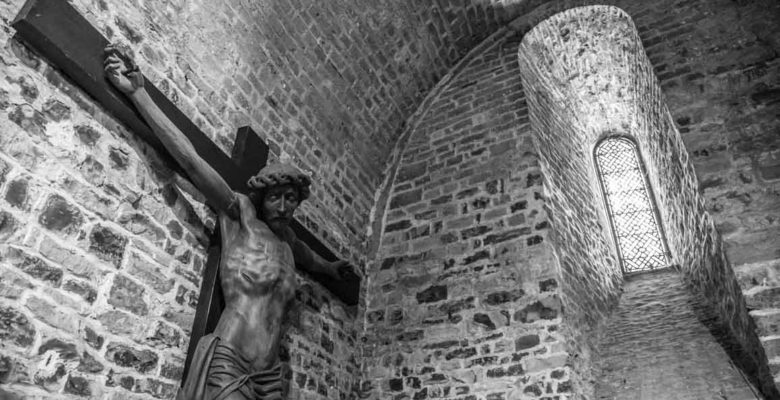 To download this beautiful resource for households that supports the celebration of Good Friday at home as a PDF, click here.

On Good Friday we commemorate the crucifixion of Jesus. The calendar date of Good Friday varies from year to year, along with Lent and Easter, but it is always the Friday before Easter. It is a somber day of silence and prayer and is the only day of the church year we do not celebrate the Eucharist. The origin of the name “Good” Friday is unknown. Some believe it comes from an older name, “God’s Friday.” Good Friday was called “Long Friday” by the Anglo-Saxons, and is called “Holy Friday” in some places.

The portion of the Gospel of John known as The Passion (John 18-19) is often read on Good Friday. As we read, it is critical to understand that these texts were written in a particular context, to acknowledge that they have been wrongly used to perpetrate anti-semitism and violence against Jewish people, and to remember it was the Roman Empire who killed Jesus. Crucifixion was a common form of public execution at the time. It is believed Jesus’ crucifixion took place just outside Jerusalem, in Calvary, also called Golgotha.

So they took Jesus; and carrying the cross by himself, he went out to what is called The Place of the Skull, which in Hebrew is called Golgotha. There they crucified him, and with him two others, one on either side, with Jesus between them. When the soldiers had crucified Jesus, they took his clothes and divided them into four parts, one for each soldier. They also took his tunic; now the tunic was seamless, woven in one piece from the top. So they said to one another, “Let us not tear it, but cast lots for it to see who will get it.” This was to fulfill what the scripture says, “They divided my clothes among themselves, and for my clothing they cast lots.” And that is what the soldiers did. Meanwhile, standing near the cross of Jesus were his mother, and his mother’s sister, Mary the wife of Clopas, and Mary Magdalene. When Jesus saw his mother and the disciple whom he loved standing beside her, he said to his mother, “Woman, here is your son.” Then he said to the disciple, “Here is your mother.” And from that hour the disciple took her into his own home. After this, when Jesus knew that all was now finished, he said (in order to fulfill the scripture), “I am thirsty.” A jar full of sour wine was standing there. So they put a sponge full of the wine on a branch of hyssop and held it to his mouth. When Jesus had received the wine, he said, “It is finished.” Then he bowed his head and gave up his spirit. (John 19:17-31)

At the end of the Maundy Thursday liturgy, the altar is stripped of linens and the sanctuary is darkened. We remember how barren and lonely the world would feel without Jesus’ life and love. On Good Friday, we immerse ourselves in the heartbreaking story of Jesus’ crucifixion. Consider what objects and artwork in your home remind you of Jesus’ life. Cover or put those items away until Easter.

Put a cross in a space where you can sit and pray. If you don’t have a cross, create one out of whatever you have at home. For a time, darken your home. Put away distractions. Silence noisy devices. Sit with the cross and meditate or pray. What do you notice? How do you feel? What lamentations, sorrows, and prayers are you bringing to the cross? What do you hear when you listen to the silence?

Lord Jesus Christ, Son of the living God, we pray you to set your passion, cross, and death between your judgement and our souls, now and in the hour of our death. Give mercy and grace to the living; pardon and rest to the dead; to your holy Church peace and concord; and to us everlasting life and glory; for with the Father and the Holy Spirit you live and reign, one God, now and forever. Amen.

Who Killed Jesus?: Exposing the Roots of Anti-Semitism in the Gospel Story of the Death of Jesus by John Dominic Crossan, Harper One, 1996.

To download this beautiful resource for households that supports the celebration of Good Friday at home as a PDF, click here.

Photo by  Marina Sgamato  on  Scopio.