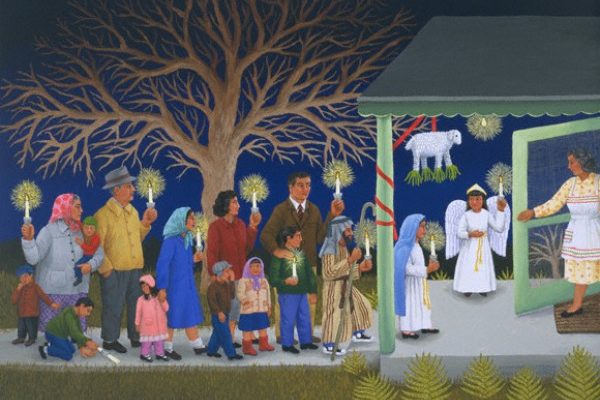 “The processional stops at a previously selected home and asks for lodging for the night. The people are invited in to read scriptures and sing Christmas carols called villancicos.”

What is Las Posadas?

Las Posadas begins on the 16th of December and continues for the next nine nights. Las Posadas (Spanish for “the inns” or “the shelters”) re-enacts Joseph’s search for a room at an inn with Mary.  It is an elaborate preparation for La Navidad (Christmas) in Mexico and some Central American countries.

This tradition dates back to the sixteenth century and St. Ignatius Loyola, who used an Aztec festival to teach about the birth of Christ.  He also wanted to replace the nine-day celebration of the birth of the Aztec Sun god with a Christian celebration.  What started as a novena, or nine days of prayer, eventually moved from the church to the community and was celebrated in people’s homes.

Las Posadas includes a procession led by children, followed by adults and musicians.  Included in the processional is a doll representing the Christ Child and images of Joseph and Mary riding a burro, walking through the community streets. The processional stops at a previously selected home and asks for lodging for the night. The people are invited in to read scriptures and sing Christmas carols called villancicos. Refreshments are provided by the hosts.The doll is left at the chosen home and picked up on the next night when the processional begins again.

What if we were to celebrate Las Posadas by having families deliver the Holy Family (figures of Mary, Joseph and the baby Jesus) to a different home each evening from December 16th to the 23rd? On Christmas Eve, the last family could bring them to the Christmas eve service at church, to reside in the stable and joined by the shepherds and sheep, thus completing the journey to create a traditional manger scene. (Remember though, the magi don’t appear until January 6th.)

You can download a free booklet called “How to Celebrate a Mexican Posada”, prepared by Hugo Olaiz of the Diocese of North Carolina, Here.

The Episcopal Network for Stewardship has more links about Las Posadas that can be found here on their site.