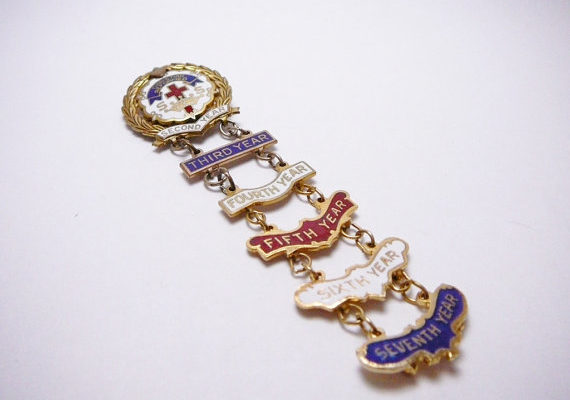 As a child growing up in the Episcopal Church, my family worshipped in a growing congregation filled with children – probably the norm for the 1950s-1960s in any mainline church as the baby boom began to fill school classrooms as well as Sunday Schools. I still have my “award pin” in which every year I received a “bar” to add to the “cross and crown” shield (first year) with “wreath” (second year) enameled pin. Twice a year I remember the superintendent of our Sunday School (probably January and June) call children forward for their attendance award. It always started with those called forward for their “first year” of excellent attendance. Many would come forward as they heard his or her name, and as the “years” progressed to five years, eight years, ten years, fewer children would come forward.

My cousins and I (weekly church goers as my grandparents lived a block away) would always be the last ones called up. I remember several years getting called up twice in one year; I was ten years old, but had attendance pins showing I had had eleven years of excellent attendance. The reward for perfect attendance of coming to Sunday School 365 days a year. If we happened to be out-of-town any Sunday of the year, all my parents had to do was get a note from whatever church we had attended on our vacation saying I had gone to church and it was counted toward my perfected attendance. It was fun competition, and I was a winner.

Years later, I was a coordinator of the Church School at that same church. We had survived the 60s and the 70s, and were now living in an enlightened age in which competition was frowned upon – especially in the church. We were all equals in the sight of God and did not want to slight any child. We gave out little pins at the end of Church School each year to every child, including a home-made certificate acknowledging their participation over the past academic year. All the children loved coming forward to be recognized. But God forbid if we messed up and forgot about little Johnny who happened to be in church for the first time in six months. Luckily we had extra blanks to quickly fill in at the last moment – or face a parent’s wrath.

What brought these memories back to me this week? An Op-Ed piece in the New York Times by Ashley Merriman, Losing Is Good for You.

As children return to school this fall and sign up for a new year’s worth of extracurricular activities, parents should keep one question in mind. Whether your kid loves Little League or gymnastics, ask the program organizers this: “Which kids get awards?” If the answer is, “Everybody gets a trophy,” find another program.

Trophies were once rare things — sterling silver loving cups bought from jewelry stores for truly special occasions. But in the 1960s, they began to be mass-produced, marketed in catalogs to teachers and coaches, and sold in sporting-goods stores.

Today, participation trophies and prizes are almost a given, as children are constantly assured that they are winners. One Maryland summer program gives awards every day — and the “day” is one hour long.

My son (now an adult) played in all the usual elementary school age sports – t-ball, soccer, etc. And he has (in boxes in our attic) all of the trophies to prove it. They are in a variety of shapes and sizes, depending on whether they were participation awards or actual 1st Place statuettes for winning “championships.” Each banquet of pizza, macaroni & cheese, and soda involved spending hours watching each team (and child) called forward to get their prize. Everyone was a winner.

If children know they will automatically get an award, what is the impetus for improvement? Why bother learning problem-solving skills, when there are never obstacles to begin with?

If I were a baseball coach, I would announce at the first meeting that there would be only three awards: Best Overall, Most Improved and Best Sportsmanship. Then I’d hand the kids a list of things they’d have to do to earn one of those trophies. They would know from the get-go that excellence, improvement, character and persistence were valued.

It’s accepted that, before punishing children, we must consider their individual levels of cognitive and emotional development. Then we monitor them, changing our approach if there’s a negative outcome. However, when it comes to rewards, people argue that kids must be treated identically: everyone must always win. That is misguided. And there are negative outcomes. Not just for specific children, but for society as a whole.

So I ponder, should our churches “reward” children for attendance? If so, how? If not, why not?