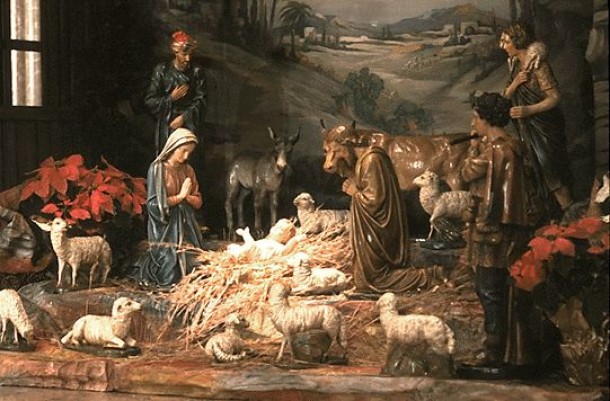 Richard Giles is the author of several books regarding worship and creative liturgical space. Now living in Tynemouth, England, he served as the Dean of Philadelphia Cathedral from 1999 to 2008. This essay is taken from Times and Seasons: Creating Transformative Worship Through the Year (2008: Church Publishing).

The feast of Christmas celebrates the birth of Jesus the Christ. What originally grew out of the natural curiosity of devoted followers about the place and date of the birth of their Lord and Saviour subsequently developed into an affirmation of the doctrine of the incarnation, the entry of the divine and eternal Son of God in human life. Associated with this came an increasing devotion to Mary, mother of the Lord, who with time was hailed as no less than theotokos, God-bearer.

Given the primitive recording procedures current at the time, there is of course no way the Church could ever have determined the actual date of Christ’s birth. Instead, they went one better, and came us with a public relations coup which one liturgical scholar has described as ‘sheer pastoral genius’ (R.F. Buxton in Davies (ed.), 1986).

The date of December 25th was purely speculative, and had more to do with the winter solstice than with any inside information as to when the special birth actually took place. The golden opportunity for a takeover came in 274 C.E. when the Emperor Aurelian, little suspecting what a wily lot the Christians were, had the temerity to inaugurate a festival in honor of the Invincible Sun, Natalis Solis Invicti. The Church simply took over this feast of the Son, an audacious masterstroke, which combined the human need for a party around the shortest day of the year with delight in the birth of a child, especially one hailed as God-with-us.

This Christianization of pagan festivals and institutions became a trademark of an upbeat young Church, which, despite undergoing occasional periods of brutal suppression, brimmed with confidence at its own destiny. This is perhaps difficult to conceive in an age like ours where secularism has the upper hand, but the facts speak for themselves. ‘The bigger they come the harder they fall’ seems to have been the Church’s motto during the early centuries, and sure enough, the Roman Empire itself became, unbelievably, the Church’s biggest catch, albeit in a way which was to leave the victor compromised and enfeebled for evermore.

Others of a more prosaic frame of mind determined the birth date by simply counting nine months from March 25th , the alleged date of the annunciation of Jesus’ birth by the angel Gabriel to Mary. Hippolytus and Tertullian also understood March 25th as the date of the crucifixion, so December 25th has a kind of neatness to it.

At any rate, whatever theory is preferred, it took the Church nearly four hundred years to nail it down. The earliest evidence for the date is found in 336 C.E. (in the Philocalian Calendar describing contemporary Roman practice). With the conversion of the Emperor Constantine in 312, the date of December 25th to mark Christ’s birthday gained currency and spread rapidly from Rome. In the Church of the East, however, the process took a little longer, given the primacy of the baptism of Christ. In the Armenian Church to this day, January 6th is the only day specifically devoted to the incarnation.

The theological controversies of the fourth to sixth centuries concerning the Person of Christ contributed to greater emphasis on December 25th as the Feast of the Incarnation, and to its politicization as a useful stick with which to bash heretics. Over the last century or so there has been a significant decline in the importance attached to Christmas, now generally regarded as being of secondary importance to Easter.

After all, birth narratives occur in only two of the four Gospels, and over the last hundred years, New Testament scholarship has led to widespread questioning of their historical authenticity.

Christmas is a confusing occasion in relation to contemporary culture, leaving the Church never quite sure whether it presents a challenge or an opportunity. The primitive desire to defy the darkest period of winter with merrymaking is common to all societies, especially in northern Europe, and was given a huge boost in the nineteenth century by the Prince Consort’s imported Christmas tree and by the works of Charles Dickens.

The Church’s Christianization of pagan festivals in the first centuries, while a master stroke of cultural colonization, also leaves the Church with many problems today. Christmas thrives as a major cultural and commercial festival even when stripped of religious meaning, and has to be reclaimed and in some respects re-invented by the Church if it is to retain any spiritual significance.