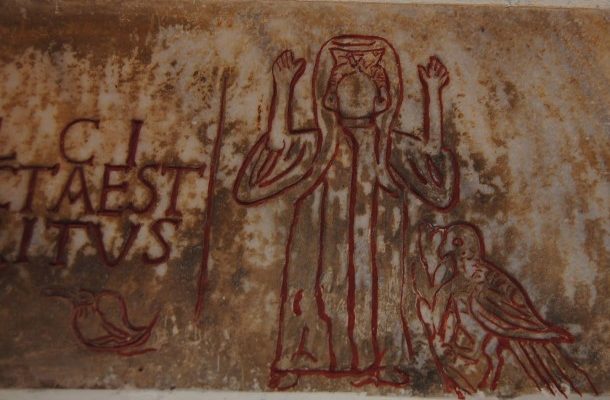 “Thus it is not surprising to find the influence of the synagogue liturgy on the forms of worship of the early Church. This influence is clear in the Liturgy of the Word, the form of prayers and the postures for various parts of the service.”

The traditions of Jewish worship, both in the home and in the synagogue, had a great influence on the development of the worship of the early Christians.

The first Christians, who were Jewish, continued to attend the synagogue until they were excluded in AD 70. The Gospel of Luke tells of Jesus’ attendance at the synagogue in Nazareth and his invitation to read from the prophet Isaiah, after which he spoke of the fulfillment of the prophet’s vision (Luke 4:16-30). Paul nearly always went first to the local synagogue when he began to preach in a town.

Thus it is not surprising to find the influence of the synagogue liturgy on the forms of worship of the early Church. This influence is clear in the Liturgy of the Word, the form of prayers and the postures for various parts of the service.The synagogue service was composed of two readings from scripture, the recitation of psalms, often a sermon, and prayers that include the Shema (Hear, O Israel). The first reading was from the Torah (the first five books of the Old Testament.) By the first century of the Christian era, the Torah was read in order from the beginning to the end, chapter by chapter.The second reading was from the prophets or writings (the historical and wisdom books).

A qualified visitor might be invited to do the second reading (Luke 4:16-17). Psalms were chosen as a devotional commentary, and a sermon expounded on readings. It is not clear whether the prayers came first or last in the synagogue service.

The early Church kept this structure for the Liturgy of the Word. Two readings from the Old Testament, a reading from the Acts of the Apostles or from the letters, and a reading from the gospels (when they were available in written form) made up the early Christian meeting (Greek, syntaxis). The prayers came after the readings and sermon.

Although non-Christians and catechumens were allowed to remain for the readings and sermon, they were excluded from the prayers. To the early Christians, the prayers were the prayers of the faithful and reserved for the baptized. St. Justin, a Roman of the second century, describes the worship of a Christian community around AD 150:

And on the day called Sunday there is a meeting in one place of those who live in cities or the country, and the memoirs of the apostles or the writings of the prophets are read as long as time permits. When the reader has finished, the president in a discourse urges and invites us to the imitation of these noble things. Then we all stand up together and offer prayers (First Apology, 67).

The characteristic Jewish form of prayer is berakah, a blessing and thanksgiving to God (Greek, eucharistia). This consists of an initial proclamation of thanks and praise, then the recall of saving deeds of God with a request that these deeds be realized in the present or future, and a concluding note of praise. Such berakah had a strong influence on Christian prayers, especially on the eucharistic prayers.

In the synagogues, the reader and the congregation stood for the reading of the Torah. Very early in Christian worship, the people stood for the gospel. Sitting was the posture for teaching in both synagogue and early church. The bishop sat on his chair as the representative of God enthroned, and he preached the tradition—the faith (traditio, handing over).

The normal Jewish posture for public prayer was standing with hands uplifted. Pictures in the catacombs indicate that this posture was also used by early Christians. This posture, called orans (Latin, praying) came to be seen as the posture of resurrection, the posture of those accounted worthy to stand before the Lord.

Since kneeling was associated with pagan cults, it was avoided in the early churches and used only for public penitents. In AD 325, the Council of Nicea forbade the faithful to kneel in prayer on Sundays and during the entire Easter season (Canon 20). In late medieval times, a predominately penitential approach to the Eucharist became common and the laity knelt for the entire service; only the celebrant remained in the orans posture.

Living the Good News is a lectionary based curriculum published by Morehouse Education Resources.