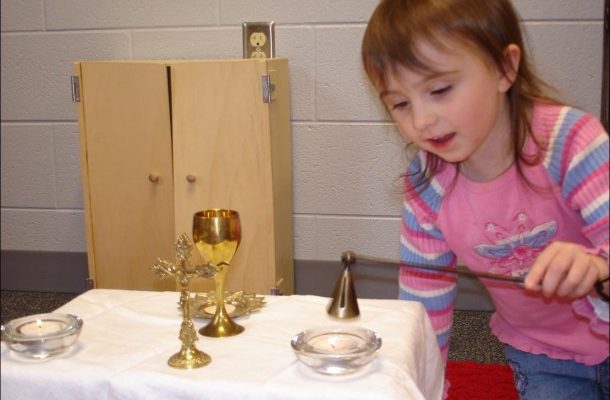 Our grandson, born in the late 1980s, was blessed to belong to a church that did indeed honor the rich spiritual potential of the young child. At their Sunday morning Family Eucharist he was welcomed at the Table of the Lord to receive the Bread and the Wine along with his parents and the parish community. It is his generation that will be among the first in the Episcopal Church to never remember when he was not fed at the Table of the Lord.

It was his mother’s generation, however, that came of age at the time that General Convention of the Episcopal Church in 1971 asserted that “admission to communion is to be based upon baptism alone, not upon baptism plus Episcopal confirmation.” This was not a decree that came to fruition overnight – but a long . . . slow . . . process that is still unfolding in various stages in different places around the country.

It took almost another 10 years for this to really begin to sink in. In 1988 the General Convention made it necessary to make yet another statement saying it “unequivocally affirms that all baptized persons, regardless of age, may receive communion.”

This was the turning point for infants and toddlers to be really invited to the Table – but always at the parents’ discretion as to the exact and most appropriate time for each child to receive. . . . . It was quite interesting to see the differences in how parishes responded – to some degree based on geography and cultural dynamics more than on liturgical or theological reasoning.

. . . What if parents considered the following accounts?

There is a story from Texas of the four-year-old who bolted forward down the aisle when the priest lifted the elements and said, “The gifts of God for the People of God.” As the child knelt there alone by the altar rail with hands lifted and eyes fixed, the priest turned to the congregation and remarked, “Would that all might be so eager to come to the table.”

There is the young mother who tells of taking her restless and fidgety two-year-old out of church so as not to disturb “the proper people at prayer” during the Eucharist. As she drags the balking child down the back aisle, screams can be heard all the way down the front aisle as the child cries at the top of her lungs, “But I want to see Jesus, I want to see Jesus!”

And there is the four-year-old in New Orleans who had been able to receive the Bread and Wine at diocesan events with his mother but was not able to receive at his home parish. His mother tried to explain that it would be unfair for the other children if the priest were to make exception for him. Four-year-olds know about “what is fair.” They learn it first on the playground. So on the playground that Sunday morning he organized a kneel-in. During the Eucharist that followed, there at the altar rail knelt every child with their parents, who were taken by surprise, to see  their lifted hands held high, asking for the Bread of Life. No one was more surprised than the priest – who was absolutely overcome and lovingly placed the Bread into the begging hands of these hungry hearts.

Finally, there is Aspen who was 21 months old with early verbal skills. When his mother brought him to church and brought him to the Nursery downstairs, he kept trying to break away from her and climb up the stairs to the sanctuary, saying, “Upstairs. Amen. Amen.” I thought it was curious that “Amen” was the one word that he associated with our worship, thinking that this congregational response had made a great impression on him. During the Eucharist when the time was right, Aspen’s mother and grandmother came down to the Nursery to bring Aspen up to the altar rail. What a joy to see little Aspen standing on tiptoes reaching up to meet our Good Shepherd in the Sacrament. As he receive the Bread he said, “Amen!” and then he lovingly touched the cup and received the Wine with an approving “Amen!” Now I knew why he was eager to go upstairs to say, “Amen.” Not just to chime in with the congregational response, but to voice his own personal affirmation that Jesus is present for him in the Bread and in the Wine.

How nice it would be if our churches today could honor this privilege of welcoming young children to the table by also encouraging their full presence at the Liturgy. This is done quite well in those larger churches that also have a Family Eucharist, happily including infants and toddlers, then a time for Christian Formation followed by a more traditional late service. Some smaller churches also attempt to work on a compromise, with a more child friendly atmosphere within a traditional worship experience. But in many places there is still the struggle between worship and education taking place simultaneously. One wonders if it might not be the children who get compromised in this squeeze. They are denied a full experience of Eucharistic worship. There is not an easy answer, but one to be seriously pondered if we genuinely do want to invite our children to the table for a full meal.

Genelda Woggon has been ministered to and by children for over 40 years in her professional work as a Christian Formation Leader, most especially through the Catechesis of the Good Shepherd for the past 20 years. She coordinates the work of the Catechesis at St. Mary’s Episcopal Church in Asheville, NC and also serves as Consultant for the Catechesis in the Diocese of Western North Carolina. She is the author of The Seed of God. This reflection was first published in Occasional Papers . . . articles exploring the theology and spirituality of children (April 2011, Issue XVI) and is used with permission.