Home/Christmas/Crèche Sharing Across the Miles 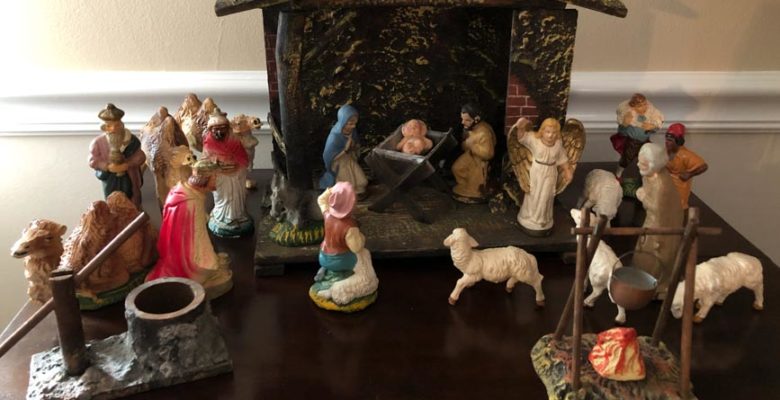 As many church buildings are closed and continue to offer worship over Zoom and other online platforms, we can still celebrate the birth of Christ throughout the twelve days of Christmas together.

Many congregations have a nativity crèche (a model or tableau representing the scene of Jesus Christ’s birth) displayed in their sanctuary or outside during the season of Christmas. Many homes also set up a crèche during Advent, leaving baby Jesus out of the scene until Christmas Day and placing the three Magi and their camels in other rooms of the house, slowly traveling closer each day until their arrival on Epiphany, January 6th. Angels and shepherds with their sheep often surround the scene with the donkey that accompanied Mary and Joseph on their journey to Bethlehem.

The earliest representation of the nativity can be seen in a fresco found in the catacombs of St. Priscilla, second century B.C.E., portraying the Mother and Child, the three wise men, and St. Joseph or perhaps the prophet Isaiah, and above, a star with eight points. The nativity of Jesus has been a major subject of Christian art since the fourth century with depictions based on the narratives in the Bible from the Gospels of Matthew and Luke, and further elaborated by written, oral, and artistic expressions. Tradition attributes the introduction of the nativity scene to the vast array of Christmas customs to St. Francis, who in 1223 in the village of Greccio* near Assisi on Christmas Day, (as told by St. Bonaventure) took a manger and filled it with hay, tied an ass and an ox near it, and with a crowd of people from all over the neighboring countryside celebrated the Mass (Holy Eucharist or Holy Communion) in front of the manger. Over time, statues, rather than living people and animals, were used, which eventually led to the in-home nativity scenes that are so much a part of our Christmas today.

This year we can be creative in sharing our crèches.

*Note: The word crèche is the French word for a manger, which comes from the Italian word greccio, the namesake of the legendary town visited by St. Francis.

Adapted from an activity in the Christmas chapter of Faithful Celebrations: Making Time for God from Advent through Epiphany edited by Sharon Ely Pearson (Church Publishing, 2018).

Featured Image: Ely Family Creche, a Christmas gift to my parents from my dad’s parents on their first Christmas in 1950.