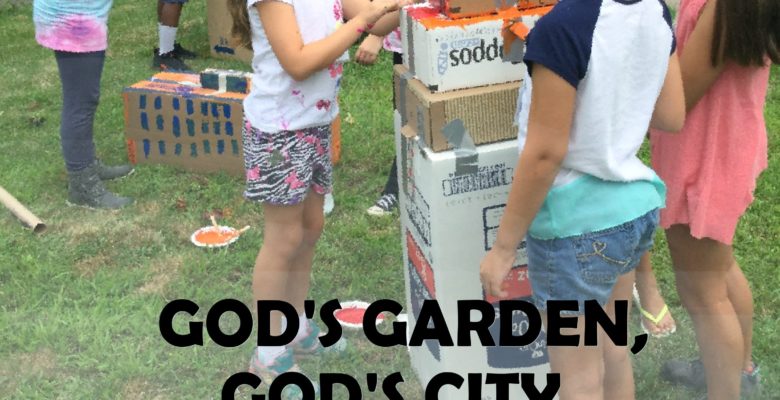 God’s Garden, God’s City is a five-day program specifically designed for churches interested in investigating the arc of the faith story from the Book of Genesis through Revelation to individuals today.

“God’s Garden, God’s City” traces the covenant history of God’s people while highlighting the theme of care for “God’s Garden,” the earth, and “God’s City,” human society living in harmony with creation. It follows this theme through the presentation of a sequence of Biblical landscapes — Garden; Desert and Holy Mountain; Land and City; Exile and Hope; and New Creation.

Each day of the curriculum begins and ends with Bible stories, told to the children in the context of worship, using either the Beulah Land feltboard or a number of recommended illustrated Bibles.

The curriculum focuses on the scripture stories in their original context and as representative of universal human themes, such as guilt, alienation, loss, exile, promise, reconciliation and hope. The Beulah Land feltboard figures show the Biblical people as dark-complexioned. The selected children’s Bibles recommended for use in the absence of Beulah Land resources, are chosen in part on the basis of their depiction of the characters as dark-skinned Middle Eastern people. If an edition whose illustrations show blond or light-skinned characters is nonetheless recommended due to other strengths, this shortcoming is pointed out.

The role of women in the covenant stories is highlighted; one of the featured stories is the story of Ruth.

Suggested role-playing games are stylized and not gender-specific. Suggested games are adaptable and are presented as one of several alternative activities. When a suggested game involves competition or sending players “out,” an alternative format is also suggested.

Care of creation is an intrinsic part of its theme.

THE SUNDAY PAPER, developed by lay author and artist Gretchen Pritchard, began as a source for lectionary-based cartoons.  Pritchard’s home business now offers, in addition, books on the sacraments; pageant scripts and other sources for hands-on celebration and learning; wooden toys for scriptural play; and the Beulah Land feltboard storytelling resource, with story scripts and a 39-week curriculum.

This VBS, originally compiled by Pritchard’s daughter, the Rev. Grace P. Burson, and extensively revised and expanded by Gretchen Pritchard in 2019, embodies THE SUNDAY PAPER’s basic principles of faithfulness to scripture as a single unfolding story of God’s saving work, from “Once upon a time” to “happily ever after;” and its emphasis on “helping children to acquire a vocabulary of crucial Scriptural images, and to relate the Gospel to the Old Testament, the life of the Church, and their own lives.”

“God’s Garden, God’s City” adds to this theological perspective the explicit theme of care for “God’s Garden,” the earth, and “God’s City,” human society living in harmony with creation.