Home/Sunday School/Help Me Come Closer to God by Myself: The Philosophy of Catechesis of the Good Shepherd 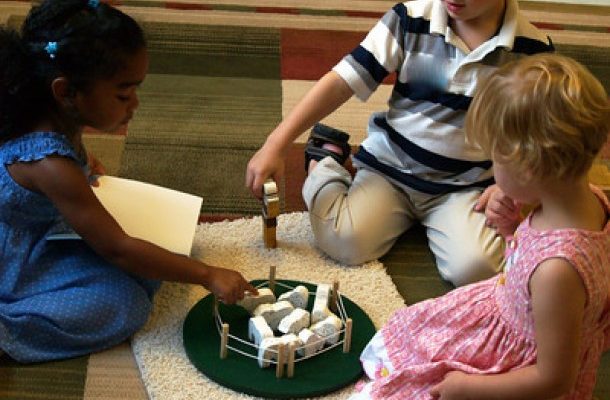 “This became a process that is a particular way of the adult being with the child in the Presence of God. It is not a curriculum as such; perhaps it is more of a whole new paradigm in the story of Christian Formation with children.”

The plea of the child, to which Sofia Cavalletti in her Religious Potential of the Child also responds, “ If we want to help the child draw nearer to God, we should, with patience and courage…seek to go always closer to the vital nucleus of things.  This requires study and prayer.  The child himself will be our teacher…it we know how to observe him.”   If the child is to be our teacher, and the role of the catechist is to step aside and let the two great mysteries, yearning for each other – meet; then why must so much time and effort be spent in preparation to become a catechist?

Sofia gives us the answer.  To go to the nucleus of things is to meet the young child who is also in the nucleus of things in the life cycle, where they are ready for the essence of Scripture and Liturgy.  They have a unique call to go to the heart of the matter taking the catechist with them. The greater knowledge one has of this distilled essence, the fewer words needed to express it.  This requires study.

The next answer came at the end of my experience in the 90 hour Level I Formation Course of the Catechesis of the Good Shepherd held by the National Association in 1991.  Our closing worship was a combined service of the Catholic and Episcopal participants.  The sermon was beautifully preached by a layman from the Melkite Rite (Eastern Catholic). He spoke of the “Humor of God” as he charged us to “set aside all our hard work and intensive training and to bring our emptiness of spirit to be filled by the wonder of the child standing before the mystery of God….”  This requires prayer, for sure!

When I first began to explore the Catechesis of the Good Shepherd I asked how they could find anyone to make this kind of commitment, as most parishes I knew had difficulty getting folks to commit for one Sunday a month or less. A seasoned catechist and Director said, “Young moms today who take time out of their career to be home with their children – want to do more than make a jar of jelly for the parish bazaar – they want to make a difference.” We find today this same cadre of mothers and sometimes an increasing number of fathers. Added to that is a rich pool of the newly retired, grandmothers, and clergy.  Call and commitment is the bottom line for the catechist and the parish.  When one is called there are no obstacles – so often in recruitment everything can be seen as an obstacle.

The Heart of Catechesis of the Good Shepherd

Catechesis of the Good Shepherd had its beginnings in Rome in 1954 as Sofia Cavalletti and Gianna Gobbi pursued the revelation of the young child’s religious potential, based on the “self-teaching” principles of Maria Montessori. This became a process that is a particular way of the adult being with the child in the Presence of God. It is not a curriculum as such; perhaps it is more of a whole new paradigm in the story of Christian Formation with children.  It has been the roots from which many curricula today have evolved through inspiration and adaptation – each according to particular needs and interest.

For those who feel called to walking the spiritual journey with the child, through the work of the Catechesis of the Good Shepherd, check the listing of Formation Courses with various formats and time frames in your area.