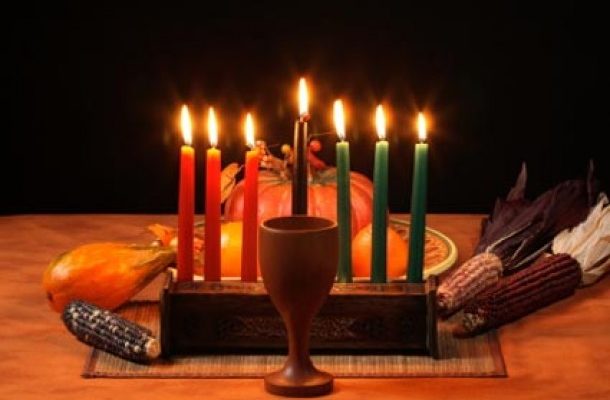 The Meaning of Kwanzaa

Kwanzaa (pronounced Kwon-zah) means first fruits and is a non-religious seven-day celebration created in 1966 in the midst of the Black consciousness movement in the United States. It therefore reflects the activism of that time and the call for cultural unity. In the context from which Kwanzaa emerged, cultural nationalism was predicated upon the belief that there existed among African people globally a particular ethos or way of being that could restore a sense of community and wholeness to a people fragmented and confused by the psychological and sociological conditions of oppression. Kwanzaa was birthed within a cultural nationalist organization called the US organization, founded by Dr. Maulana Karenga. Dr. Karenga had developed a way of thinking about color, consciousness, and culture which he titled Kawaida.

Today Kwanzaa is celebrated from December 26th thru January 1st.

Dr. Karenga articulated that being Black was not just the result of skin color but of consciousness, cultural ways of being, as well as the color of one’s skin. It was from this framework that Dr. Karenga created the Nguzo Saba (seven principles) on which Kwanzaa is based.

It is in its intent as much as in its structure. Dr. Karenga explains the intent of Kwanzaa to connect five common African ways of being in celebration:

1.  The ingathering of family, friends, and community. There are times when we can recall how good it felt just being around family and friends; somehow whatever was ailing us seemed to be less intense once we all got together. For many of us, gathering became the sign that everything was going to turn out alright; we recognized that strength in coming together.  We sang the chorus of songs like “by and by when the morning comes, all the saints of God will be gathering home; we will tell the story how we overcome and we’ll understand it better by and by.” Kwanzaa builds upon the existing strength in gathering as a community and as a family.

2.  Reverence for the creator and creation (including thanksgiving and recommitment to respect the environment and heal the world). A Kwanzaa ceremony opens with a welcoming libation. A libation acknowledges all aspects of creation and the one who created all. In the traditional African context, the libation is a prayer for spiritual unity among those who are present, those who are deceased, and those who are yet unborn. The libation creates a circle of unity by acknowledging that all of creation is affected by what each one of us chooses to recognize and to do. The libation uses one of the Kwanzaa artifacts, the unity cup (kikombe cha Umoja in Kiswahili), water, and a live plant. It is used to pour tambiko (libation) to the ancestors in remembrance and honor of those who paved the path down which we walk, and upon whose shoulders we stand, and those who taught us the good and the beautiful in life.

3.  Commemoration of the past (honoring ancestors, learning lessons, and emulating achievements of Afrikan history). Each symbol of the Kwanzaa table and the presence of African artifacts for aesthetics purposes represent the wealth of African culture and tradition. The Kwanzaa setting with these symbols and artifacts is set up and talked about every night of Kwanzaa. The oral sharing of what each symbol represents imparts to the listener the aspects of our culture and legacy that are most valuable to our wholeness and healing.

5.  Recommitment to the highest cultural ideals of the Afrikan community (for example, truth, justice, respect for people and nature, care for the vulnerable, and respect for elders). This aspect of Kwanzaa is the core cultural transmission and source of community healing for African people globally. It is represented by the seven candles and the candleholder itself. The Kiswahili word for candles is Mishumaa and the word for candleholder is Kinara.

The Nguzo Saba (Seven Principles) is represented by each candle being lit, discussed, and illustrated through song, dance, drama, and lecture for each of the seven days of celebration. Kwanzaa is celebrated by over 20 million people around the world. They are principles that can be applied to all aspects of life, in all situations, and in different contexts:

Each night of Kwanzaa after the libation and welcome, songs are sung that talk about the principles. The candle lighting ceremony also done each night begins by using call and response to say each principle, its Kiswahili name, and its meaning. The colors of Kwanzaa are black (for the people), red (for their struggle), and green (for the land and the better future that is the result of the struggle). On the Kinara is placed one black candle, three red candles, and three green candles. These are the Mishumaa Saba (the seven candles) and they represent the seven principles. The black candle represents the first principle Umoja (unity) and is placed in the center of the Kinara. The red candles represent the principles of Kujichagulia (self-determination), Ujamaa (cooperative economics), and Kuumba (creativity) and are placed to the left of the black candle. The green candles represent the principles of Ujima (collective work and responsibility), Nia (purpose), and Imani (faith) and are placed to the right of the black candle. The black candle is lit first on the first day of the celebration. And the remaining candles are lit afterwards from left to right on the following days. This procedure is to indicate that the people come first, then the struggle, and then the hope that comes from the struggle.

More resources and books about Kwanzaa can be found at The African American Lectionary.