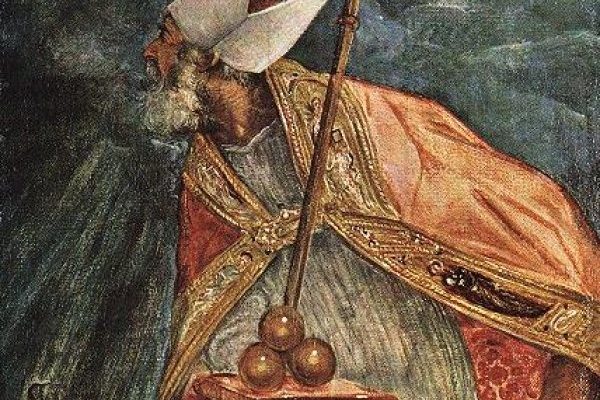 “Almighty God, in your love you gave your servant Nicholas of Myra a perpetual name for deeds of kindness both on land and sea: Grant, we pray, that your Church may never cease to work for the happiness of children, the safety of sailors, the relief of the poor, and the help of those tossed by tempests of doubt or grief”

Who Was St. Nicholas?

Nicholas of Myra, (c. 342) was a Greek bishop from Lycia, now modern-day Turkey. It is possible that he was one of the bishops attending the First Ecumenical Council of Nicaea in 325. Legend gives him a reputation for secret gift-giving, such as putting coins in the shoes of those who left them out for him, thus becoming the model for Santa Claus, whose English name comes from the Dutch Sinterklaas.

There are many traditions and myths surrounding Saint Nicholas, whose feast day is December 6th. One legend tells how a terrible famine struck the land and a malicious butcher lured three little children into his house, where he slaughtered and butchered them, placing their remains in a barrel to cure, planning to sell them off as ham. Bishop Nicholas, visiting the region to care for the hungry, not only saw through the butcher’s horrific crime but also resurrected the three boys from the barrel by his prayers. Another version of this story, possibly formed around the eleventh century, claims that the butcher’s victims were instead three clerks who wished to stay the night. The man murdered them, and was advised by his wife to dispose of them by turning them into meat pies. The bishop saw through this and brought the men back to life.

However, his most famous exploit is about a poor man who had three daughters but could not afford a proper dowry for them. This meant that they would remain unmarried and probably, in absence of any other possible employment, would have to become prostitutes. Hearing of the poor man’s plight, Nicholas decided to help him but being too modest to help the man in public (or to save the man the humiliation of accepting charity), he went to his house under the cover of night and threw three purses (one for each daughter) filled with gold coins through the window opening into the man’s house. One version has him throwing one purse for three consecutive nights. Another has him throw the purses over a period of three years, each time the night before one of the daughters comes “of age.” Invariably, the third time the father lies in wait, trying to discover the identity of their benefactor. In one version the father confronts the saint, only to have Saint Nicholas say it is not him he should thank, but God alone. In another version, Nicholas learns of the poor man’s plan and drops the third bag down the chimney instead; a variant holds that the daughter had washed her stockings that evening and hung them over the embers to dry, and that the bag of gold fell into the stocking. It is easy to see how today’s custom of Santa Claus came to be from these stories.

He is the patron saint of children, sailors, fishermen, merchants, broadcasters, the falsely accused, prostitutes, repentant thieves, pharmacists, archers, and pawnbrokers. Guess the legends translated throughout the Church!

Collect for Nicholas of Myra

Almighty God, in your love you gave your servant Nicholas of Myra a perpetual name for deeds of kindness both on land and sea: Grant, we pray, that your Church may never cease to work for the happiness of children, the safety of sailors, the relief of the poor, and the help of those tossed by tempests of doubt or grief, through Jesus Christ our Lord, who lives and reigns with you and the Holy Spirit, one God, for ever and ever. Amen. Collect for Nicholas, December 6  from Holy Women, Holy Men (Church Publishing, 2010).

And excellent source for faith-based activities about Saint Nicholas is The Saint Nicholas Center, which was formed to help others discover the truth about Santa Claus. Their website shares stories of St. Nick from all over the world, games, recipes, activities, and more. Also check out The Saint Nicholas Society from Canterbury, England.

A reflection from Albert Holtz, O.L.S.B. in From Holidays to Holy Days: A Benedictine Walk Through Advent (Morehouse Publishing, 2008): “Sadly, Santa Claus has come to represent the secular, consumerist side of the Christmas season, distracting many of us from Jesus, the true center of the feast, and ironically, focusing our children not on Saint Nicholas’ generous giving but on greedy present-getting. The commercialized figure of Santa Claus portrayed in plastic roof figures and on sides of trucks seems to have little to do with the saintly bishop Nicholas, but underneath all the layers of marketing and advertising gimmicks, however, Santa will always be Saint Nicholas, Bishop of Myra, who loved children and who tossed bags of gold through poor people’s windows.”