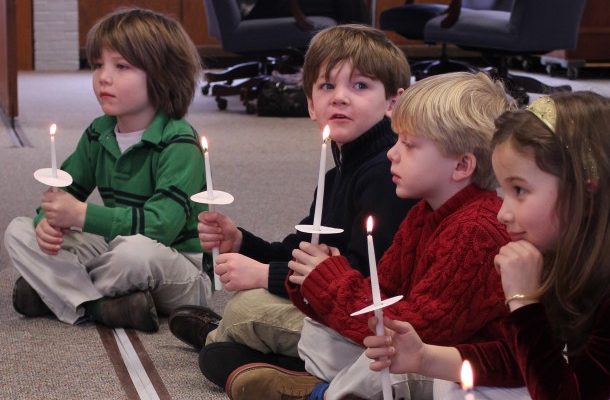 “Godly Play follows the circle of the Church Year. The lessons and room design exemplify how the child (or any age) experiences the Christian language.”

Introducing Godly Play
Many education models teach biblical facts as if they will magically make people believe in God. This misses what is most exciting about religious education: God’s self in the midst of the words playing hide and seek with us. God invites us into – and pursues us in the midst of – scripture. The Godly Play method has been created by Jerome Berryman in the Montessori method following his study with Sophia Cavalletti, to help children learn how to listen well, to hear what God is saying to them and then to make an authentic and creative response.

Many feel Godly Play is only for small children. Many desire a way to use Godly Play with older children. Godly Play today is used with all ages, including those with special needs and Alzheimer’s disease. It is the language of the people of God. Godly Play is used throughout the world in a variety of languages and denominations.

Godly Play Germany has recently released a 20-minute video (in English) that gives an excellent image about how Godly Play is practiced in Germany.

In its aesthetical and emotional characteristics, the film mirrors the basic values of this concept of spiritual mentoring. It shows sequencies of Godly Play with (1) Kindergarten, (2) elementary age children, (3) special needs young people, (4) youth and (5) adults. It gives voice to children, youth and adults as well as to story-tellers, trainers and supporters. You can see various genres of stories, the four time-phases of the concept and very different room-circumstances in (1) kindergartens, (2) churches, (3) schools, (4) trainings and (5) material making.

Godly Play follows the circle of the Church Year. The lessons and room design exemplify how the child (or any age) experiences the Christian language. This connection between architecture, language, and community is generally present in Christian churches, but in a Godly Play classroom it is much clearer. When the classroom and the lessons are internalized, children have available to them a working model of the language system to think with and to use in discussions with others about what is most important in life and death.

Children who have learned the language of the Christian People in this way will be able to enter adolescence with a working model of the classical Christian language system to help them move forward with deep Christian roots that conserve the best in their tradition, deeply grounded by a multi-generational “mutual blessing,” and also be ready to explore their expanding horizons with “playful orthodoxy.”

Learn More about Godly Play
There are several steps you can take to get a better understanding of the Godly Play program and resources in addition to watching the above video.