Home/Christmas/Tips for a “Medium” Christmas Pageant 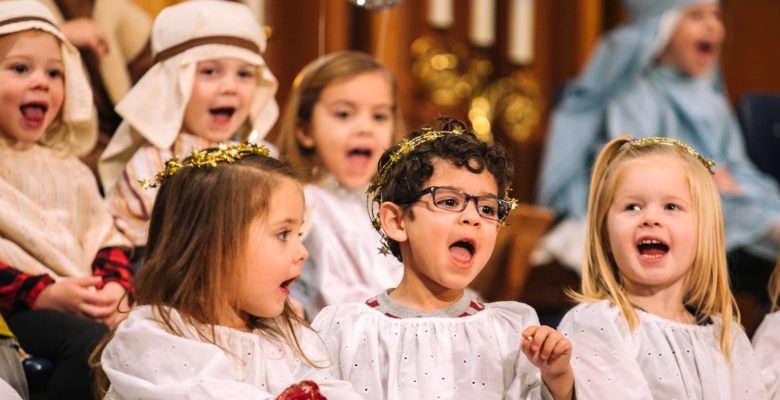 “The keys are flexibility and fellowship; this is not about the production, but about the children being invited to step forward and bear witness to their favorite bible story.”

There’s an ongoing conversation about ‘labor-intensive’ versus ‘easy to produce’ Christmas pageants; which is better for children and their parents, which offers a higher liturgical value, who should be ‘in’ the pageant, who should speak, and so on. Obviously, there are as many different ways to hold a Christmas pageant as there are Episcopal parishes.

I’ve written here before about our pageants at St. Barnabas, Denver: Pomp & Pageantry and The “Cuteness” of Children in Church (not). We’ve done published skits, a ‘traditional’ pageant (which is anything but tradition for St Bs), and twice now pageants we created and wrote. Whew.

So with pageant season once again upon us, I’ve painted myself into rather a scary corner. I keep upping the pageant ante, and the year will come when I have to backpedal. But I’m here to say that it’s all worth it when you sit your children down and they vehemently defend the pageant as an offering to their parents, the congregation, and to God; Father, Son, and Holy Spirit.

But a good pageant doesn’t have to drive you or your volunteers any further to the brink at this most insane of seasons. Here’s what works for us:

When to start? We start the Sunday before or after Thanksgiving, depending on the year,

When to rehearse? We hold rehearsals during our formation time. Yes, we lose Sunday School lessons for those 5 weeks, but aren’t we delving deeply into one of the most important lessons we have to teach? And one that resonates so deeply with our children, drawing them back to God in the midst of all the commercial craziness.

Memorized lines? We do NOT ask nor expect children to memorize their lines. Instead, we place scripts, highlighted for each part, in black three-ring binders that the kids hold and read from during their pageant offering. In fact, over the years I’ve told kids who do memorize their parts, “Wonderful, good work! But keep your binder anyway so you know where everyone else is during the pageant.”

What about kids singing? For the hymns, we write lyrics on poster board which I hold in front of me while directing the kids. This takes the pressure off memorization, and also keeps the kids looking up and singing out loud for the congregation. Some years I have 4-6 kids who sing part of a hymn as a small group. The preschool and kindergarten class always sing Away in a Manger and play the Heavenly Host and animals.

Who gets which part? We do NOT ask kids to audition. Every child in 1st through 5th grade is offered a speaking part. They are certainly allowed to opt-out. We’ve done this with 10 kids and with 30. I divide script parts; I partner kids; I add silent shepherds and extra angels; I allow kids who are so inclined speak lines together. I do what it takes to make the pageant fun, fulfilling, and meaningful to each child at his or her own level. The kids love it. Mary, Joseph, Herod, and the Angel Gabriel are usually 4th and 5th graders.

Baby Jesus? We do NOT use a real baby! Several years ago when we couldn’t find the baby doll, we hastily swaddled Winnie the Pooh. It’s a lovely funny memory for the kids, and no one in the congregation ever knew. Another year we debated whether Mary and Jesus, given the opportunity, would have used a pacifier (that year’s baby doll had one glued to its mouth).

What about costumes? Costumes can seem daunting. I inherited a closet full of them, I admit, but they are neither fancy nor difficult to make. Yards of cloth, folded and with a cut out for a child’s head; no sleeves. Another smaller piece for a headdress. A rope or another piece of cloth for a belt, and one to hold the headdress.

We raided the vestment room for angel costumes, adding tinseled garland to the shoulders and neckline and a ring of it for a halo. My favorite are the sheep – a vest and a baseball cap covered with cotton balls (a hot glue gun works well for this), and felt ears glued to the cap. Last year we had a stable cat from one child’s beloved Halloween costume. Once we had a giraffe in the stable.

And the older kids? St Barnabas’ youth group graciously helps with the pageant from the background, and supports its younger peers without having ‘parts.’ They give input in the planning, assist with rehearsals, and also marvelously step in to take a part if someone is ill on pageant day, or to hold a nervous hand and whisper a line. They will tell you, they’ve had their turn, and love seeing their traditions carry forward with the younger kids.

The keys are flexibility and fellowship; this is not about the production, but about the children being invited to step forward and bear witness to their favorite bible story.

A little humor doesn’t hurt either.